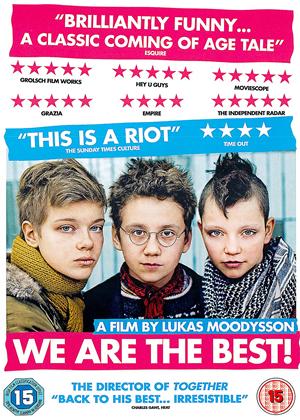 Who knew Swedish punk was this good? - We Are the Best! review by AM

A website called the dissolve ran a feature, the best films of the decade so far, in 2015. My wife and I added a lot of films from it, and when they come through our letterbox, we scratch our heads and try to remember what the film is. This is how I came to watch 'We Are The Best'. The synopsis didn't sound great on re-reading - a Swedish coming of age film, set in the early 80s. But it's so so worth watching.

It centres around 3 girls who don't fit in with the girls around them. They are obsessed with Swedish punk music and all they have is their mutual friendship. A dud performance from any of the three actresses playing these girls would kill the film, but the opposite holds here. They make you laugh, and care for them. A gem. Swedish drama isn't just Scandi-noir.

Delightful, amusing, moving - We Are the Best! review by MB

Wonderful character study of three teenagers - feels like eavesdropping at times because the friendships feel so authentic and true (fun, disagreements, naughtiness, affection). Captures the hopes, frustrations, questions (God, gender, romance, etc) and energy of early teens. Covers many bases: coming of age story, flashback to the 80s, finding who you are through friendship - and, of course, a passion for music and what it means to us in our teens. I would say this is arthouse cinema that is accessible to those more at home with mainstream movies. Give it a go!

disapointing - We Are the Best! review by ma

We Are the Best! (aka Vi är bäst!) review by Alyse Garner - Cinema Paradiso

Perhaps I have been living under an Anglicised rock but Lukas Moodysson was not a name I was familiar with until earlier this week, I have since been told that Together (2000) is well worth watching and easily his best work, but when I sat down to watch We Are the Best I could not help but wonder if I was going to miss the point a little bit.

This feeling wasn’t helped by the general theme of the film, We Are the Best tells the story of a group of teenage girls in Stockholm in the late 1980’s who form an all-girl punk band; perhaps it’s my age, perhaps it’s my general detestation of punk music but I once again felt as though for me this film would be a chore whilst others would have found much more pleasure in it.

However, as the film progresses and the general boredom and frustration of these Swedish teens transmutes into the brash, angry and assertive punk music they attempt (beginning with no idea of even how to hold a guitar) to play, I could not help but become charmed by this odd, funny and loud musical experience.

This is very much thanks to the performances from the three leads, Mira Barkhammar, Mira Grosin and Liv LeMoyne as Bobo, Klara and Hadvig, who bring these big brazen characters to life. They lift this film from what could have been a rather obvious – almost verging on the slapstick – music-comedy into a surprisingly emotional journey in which friendship, female empowerment and teenage determination win out against the naysayers and stick-in-the-mud adults who all say that “punk is dead”.

We Are the Best captures the essence of punk music, using it to perfectly compliment that desperate and occasionally fantastical period in the life of a teenage girl where she works to find an identity that falls somewhere in between child and woman, exploring notions of sexuality, autonomy, creativity and friendship. With so much uncertainty in their worlds’ the one thing these girls can be sure of is that with one another by their sides and with instruments in their hands they are, undoubtedly, the best.