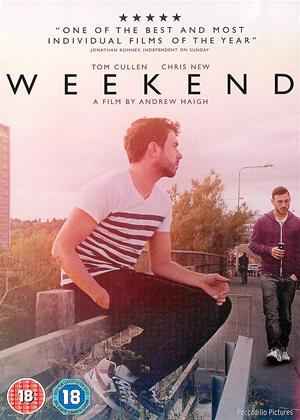 reminded me of growing up, the feeling of despair when the right one leaves and leaves that huge feeling of loss, really enjoyed it

Russell (Tom Cullen) is an unassuming lifeguard at a public pool who goes through life just being himself. He’s gay but looks like has no issues about it. He’s good friends with his all coupled up straight friends and has fun with them. When Russell hits the gay club, he cruises for his own good time.

Next thing he knows, he wakes up with Glen (Chris New), and he is the total opposite of Russell: outspoken and outgoing, with an ongoing project of interviewing his partners – one-night-stands or not – and asking them to open up about their lives. They spend 48 hours together over a course of a ‘Weekend’, and this is a film directed by Andrew Haigh.

‘Weekend’ is an indie film with a message, don’t most indie films do? But it’s not too hard sell in this one. It only wants to show how gays meet, hook up, and maybe, even fall in love. The film is indeed mumblecore; aside from its leads Russell and Glen talking their minds and hearts out about issues and situations that matter to them, they really just want to hang out. Whether they’re making out, making love, or simply cuddling, Russell and Glen will spend their time together wisely and lovingly. No, ‘Weekend’ is not ‘Before Sunset’ for gays but even if it is, it’s a good film to be compared to.

With ‘Weekend’, opening up to another person – emotionally, mentally, and physically – is the key. And talking arrives to a lot of honesty, revelations that draw you out from your shell, and ultimately, becoming freer than you’ll ever be. The sense of urgency between Russell and Glen (the latter will leave the UK and will not return in two years) make for a good devise to flesh each other out, especially Russell, who has a very quiet and introspective way on dealing with his identity. The ‘issues’ they talk about: gay marriage, living their lives without having to be poster boys for a cause, aren’t as dramatic as how gay films are proposed to be. But they’re serious as well.