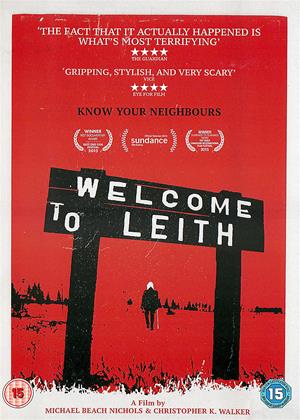 Reviews (1) of Welcome to Leith

This is one of those films which is guaranteed to get almost entirely positive reviews because criticizing it might seem a little bit like sympathizing with nazis. Unfortunately, that doesn't automatically make it a good film. Some years ago, Louis Theroux made a BBC documentary about white supremacists (included in the currently available Louis Theroux box-set) which this film constantly reminded me of by covering almost identical subject-matter nowhere near as well.

The situation seems to lend itself to high drama. Neo-nazi bigots move into a remote fly-speck of a town and buy up dirt-cheap properties with the intention of taking over the town council and establishing their own little Aryan Utopia. Fortunately the plucky locals catch on to this dastardly scheme and stand up to the fascist bullies. The trouble is, although the film attempts to portray these events in this way, it's not quite what happened.

I suppose it would be a spoiler to reveal whether or not the white supremacists' dastardly scheme succeeds, so let's just say that if your cunning plan involves taking over the town council in order to accomplish things which will come as a nasty shock to the existing townsfolk, unless you're extraordinarily thick, you'll avoid mentioning this to everyone before you've actually done it. It might also be a good idea not to shout abuse at your neighbors, threaten them with guns, or plant rows of nazi flags in your front garden until you're the one making the decisions about who does or does not get to live in your town. However, it seems that neo-nazis aren't very bright.

Unfortunately, the black comedy potential of a situation which at times resembles that Monty Python sketch where Hitler stands in the North Minehead by-election is utterly wasted by righteously indignant film-makers who want us to take these horrible but obviously powerless and incompetent bigots seriously, when the point might have been made far more effectively by emphasizing their absurdity, or, as Louis Theroux would have done, encouraging them to talk until they ended up accidentally parodying themselves. For similar reasons, less than ideal behavior by any of the people we're supposed to side with is glossed over as hastily as possible, and absolutely nothing is made of the irony of bigots who want to rewrite local laws in order to exclude everyone they don't like from "their" town having the very same methods used against them.

So, although no decent person would argue with what this documentary is ultimately saying, I personally wish they'd said it in a less thumpingly obvious way, and paid more attention to the craft of film-making than to putting across a message which almost everyone in their target audience will completely agree with already. I'm afraid I have to categorize this as worthy but dull.