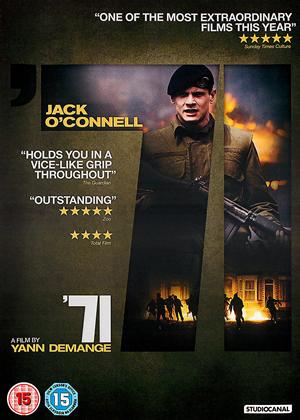 A little back story, then it is a full on tense and gripping film. A squaddie gets left behind on a mission into IRA territory. He tries to make his way back through one long night. Throw in the intricacies of a simultaneous covert operation in progress, all add to the tension.

The director hasn't taken sides here, favouring either the British army or the IRA, showing the horrors and compassion of war from both sides. A fine film.

Punchy drama-cum-thriller about a British squaddie caught between Protestants and Catholics during the Northern Ireland ‘troubles’. The mise-en-scene, aided by an insistent soundtrack, is terrific but there are two major downsides. Would-be exciting scenes are ruined by the use of irritating shaky-cam and the central figure of the squaddie is too poorly fleshed out and acted to make us care enough about his predicament. The tragic pointlessness of the conflict certainly comes across but that makes it a depressing watch. That may be the point, but the best war films can be uplifting, using the tragedy of war to heighten a lust for life. Nevertheless, a promising debut feature from director Yaan Demange.

This film makes me realise why my father used to groan and turn over the TV channel whenever the announcer said 'and now, a drama set in Northern Ireland'.

The religious conflict there (Catholics versus Protestants) is backwards even by modern European standards. They make former Yugoslavians look civilised. The place really is a dump - I could never ever live in such a place, because the same hatreds exist now, bubbling under the surface. The UK has poured money into Northern Ireland but it'll never erase that sectarian hatred.

Having said all that, this is an interesting film about a solider stuck behind enemy lines. Most credit should go to the writer Gregory Burke rather than the Director (brought up in London; born in France to French parents). The writing is spot-on - and the writer uses silence so well. The director directs this with hand-held cameras as though he's directing a Zombie film or one about black youth on an inner city council estate (his previous TV series). It doesn't always work.

The characters are all too believable - the treachery, the shifting sands of loyalty, the abuses on both sides, the horror of Northern Ireland's Troubles which, frankly, achieved nothing for the hotheaded youth of the IRA. Not sure I actually believe some of the plot - no spoilers here though but I have never heard of British undercover soldiers trying to do what they try to do to the soldier here.

Worth a watch. But lacking any comic relief whatsoever so very grim. 4 stars.

A film that (for those of us old enough to remember it) makes you reflect on the role of the Army in Northern Ireland in the early 1970s. Very difficult to decide exactly who are the heroes and villians in this scenario. Jack O'Connell is good in the leading role of the soldier left behind by his patrol in "enemy" territory and hunted by all sides for differing reasons. In some respects, the film reminds me of that 1940s classic "Odd Man Out" in which James Mason was on the run in Belfast.

As someone of an age to remember 1971 and The Troubles being on tv every day, this brought it all back vividly. The plot enables the viewer to see the issues from all sides and how the army got caught in the middle of (to most of them) was someone else's war. There are no winners, no moralising, no political points. An excellent film.

71 is a very visceral and unafraid portrayal of the troubles that neither takes sides or turns its eyes away.

I was deeply unnerved by it and found it utterly gripping. A must see.

Guns, fire, explosions, and a vulnerable soldier trapped behind enemy lines. These are just a few terms that describe the 2014 feature film ‘71. It is an important message and event in history, and was presented respectfully and accurately. I give it four out of five stars, because it is a brilliant example of storytelling and filmmaking.

The film follows Gary Hook (Jack O’Connell). He is a young British soldier who becomes separated from his unit, and is left to fend for himself in a terrifying rural war-zone. With rioting on the streets of Belfast, it is near-impossible to tell enemy from ally. Will Hook survive the night, or is he doomed to die in this foreign place?

Let us not deny it: war is hell. This is not just world wars, but even seemingly minor battles. Every year brings war epics to cinemas worldwide, but it is rare that we get films like ‘71, that portray the ‘minor’ battles. There are sure to be disagreements over how people and events are portrayed, but this is nothing new.

It is amazing to think how far Jack O’Connell has come in the last couple of years. From playing mostly minor roles in TV movies and television shows, he can now add his leading roles in ‘71 and Unbroken (2014) to his resume. Despite his early promise, he has managed to stay predominately under the radar; but I suspect all that is soon to change. The other cast were commendable, but O’Connell raised the bar pretty high.

There are definitely times when experience makes a film worth watching. There are also times when the film industry needs a fresh perspective. This film is an example of the latter. ‘71 is the directorial film debut by Yann Demange. His choice of camera movement - less restricted, non-stagnant movements - helps us to connect with these characters. They feel real, and not posed. This film’s writer was Gregory Burke, who also does not have an extensive film resume. This is his third project, and he has, without a doubt, done a brilliant job.

The editing work in films are usually an overlooked aspect - especially when done right. When specifically examining it, you can see how the short and sharp cuts work to quicken the action, and pull you to the edge of your seat.

The sets used in the film are fairly limited, but this does not take anything from it. We feel claustrophobic in the small apartments that offer little in the way of hiding spaces. As far as I could tell, the sets and costumes were era-authentic.

In-print and online critic reviews have been very positive for this film. Audiences have also responded positively, and this is not an easy task to accomplish.

There are many reasons why you should watch this film. As I have said, it ticks all of my boxes, and I would recommend this to anyone who is old enough to see it.