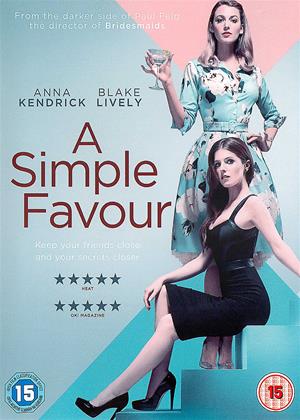 Reviews (9) of A Simple Favour

Saw this in the cinema and was pleasantly surprised. Don't be fooled into thinking it's a 'chick flick' as it's definitely not. It's very good and despite guessing the twist half way through I still enjoyed. Both leads are great and it's the first time I've since Blake Lively in anything and she was excellent in her role. Definitely give it a go!.

A vlogging mom (Anna Kendrick) befriends another who disappears. Kendrick is thankfully a bit less irritating than usual, but her limited emotional range and mugging to camera remain an acquired taste. After an hour or so the mystery deepens, but the lightweight tone, as Woody Allen has found out before, robs the plot of any drama. The ho-hum sub-Gone-Girl resolution fails to convince and is eventually played for laughs, with lots of shots of Kendrick vlogging to camera. The alternative ending on the DVD even develops into nauseating musical theatre.

You may well feel short-changed, especially if you’ve been enticed by the brilliant British trailer, which plays mostly without dialogue to an evocative Coeur de Lion song. The song, which isn’t in the film, adds an air of darkness and sophistication that’s at total odds with the film itself. Listen to the album instead.

Beautifully filmed , it reminded me of how Tom Ford concentrates on every shot having meaning.Also great music , really nice twist to have so many French songs.The plot has enough twists and turns to keep you guessing throughout although the ending was slightly contrived. Although I wouldn't say I was a fan of the Anna Kendrick films I have seen up to this one, she plays the part to perfection as does Blake Lively.

This movie is awful.

Spending 5 minutes with Anna Kendrick is quite enough, but 100 ? Irritating to say the least.

The story is unbelievable and very contrived and sadly unfunny.

If I were you I would give this one a miss.

Tonally this film is all over the place and it can't decide quite what type of film wants to be either. The 'twists' are tedious and some of the acting is very ropey (Henry Golding in particular). Paul Feig should stick to crass comedies.

I really enjoyed this from start to finish, I thought that the parts were well acted and the story quite original.

There are several twists in the film and it feels like 2 or 3 sections kind of stitched together but even through the more "serious" parts there was humour to be had.

It is hard to write any more because of spoilers.

Worth a watch! - A Simple Favour review by SD

Enjoyed this film, lots of twists and turns, sometimes a bit unbelievable but that all adds to the fun. The two female leads were very good.

Great music, good performances from the leading actors. The story itself twists and turns a bit. It hit the same sweet spot as the film ‘Kiss kiss bang bang’ for me. I felt it wasn’t necessary to take the plot too seriously, just to enjoy the ride. A bit of fun in these grim times.

We really enjoyed this mystery. Anna Kendrick is good as a ditzy vlogger who makes friends with a dissolute, outrageous businesswoman beautifully played by Blake Lively. The businesswoman suddeny disappears completely leaving the vlogger looking after her son. Mystery ensues. Recommended.

Paul Feig has such a gift for crafting comedic characters in his original comedies of Bridesmaids, The Heat and Spy that he rarely has to try too hard for a laugh in most of his films. A Simple Favor attempts to but this kind of direction into practice by staging a Gone Girl style mystery where the jokes flow more naturally out of the situations than building scenes assembled specifically for gags. On its very premise, it could easily be a drama-thriller and I almost wish Feig was willing to go that far if only to showcase how much more he can do as a filmmaker.

Based on the novel by Darcey Bell, Stephanie Sommers is the ultimate mom played by Anna Kendrick because who else could be that energetic and driven? She’s a single mom who not only has an Internet show for moms but is so involved with her son’s school functions she signs up for multiple jobs at multiple school events. Stephanie is a wholesome soul despite having lost her husband when he tragically passed away. On the other end of the spectrum is Emily Nelson (Blake Lively), a bad girl who has grown bitter with her upper-class lifestyle that clashes with being a mom. No longer impressed by her writer husband, she takes an interest in Stephanie, inviting her over for drinks. They hit it off although Emily has a way of trying to invoke the worst out of people, leading to Stephanie letting slip a dirty secret of her past.

Then Emily goes missing and turns up dead. Seeking to do the right thing, Stephanie takes it upon herself to mother Emily’s motherless children and becomes romantically involved with her husband. Of course, Emily isn’t dead and a grander scheme is soon uncovered. So what we have here is essentially a female thriller of the conniving Lively squaring off against a kindly Kendrick. The pairing up works rather well considering how naturally both of them slip so well into these roles. There’s such an ease to their presence that they can phase into the area of comedy quite easily and with little to work with. For example, there’s a scene where one evil character is hit with a car and Kendrick tries to make some quiet comedic commentary on how the evil victim won’t stop moving. A louder comedy might have made Kendrick stammer more but she nails this scene quite well with the right amount of believable and amusing dialogue.

The big problem is that many of the outside elements fall back on old comedic stagings. The kids speak in insulting adult voices of cussing up a storm and talking casually about not understanding death and being easily angered by car crashes. One of the dad’s in the school’s parent group tries to put on the whole super-dad approach by seeing himself more as a mother than a dad, acting as though he’s part of a gang where he’s got Stephanie’s back. The aspects are not exactly terrible but they feel like comedic elements from very different movies and stick out as odd sore thumbs from somewhat alternative Feig production.

Feig tries to balance the drama with the comedy in A Simple Favour and it’s a bit surprising just how much of it works. It has a handful of scenes that are great whereas others merely meander around a decent thriller plot. It’s a worthy film for the performances of Kendrick and Lively alone but I can’t help but feel how Feig would fair on a film that better embraces a more earnest attempt at dark thrillers with mere sprinklings of comedic spice. It’s a film that’s certainly not Feig’s best but it does make me hopeful to see what he produces next.