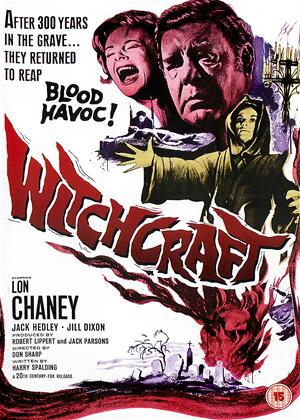 This peculiar but sometimes effective horror movie owes a huge inspirational debt to Mario Bava's extraordinary "Black Sunday", which was banned in the UK until 1968 so very few people would have noticed the similarities. Although the basic concept of a woman executed for witchcraft returning centuries later to wreak bloody vengeance upon the descendants of her killers also features in many other films, Yvette Rees, the obscure actress who plays the undead Vanessa Whitlock, was obviously chosen for her resemblance to Barbara Steele rather than her acting ability, which, since she's given no dialogue and almost nothing to do except be scary, I presume must have been non-existent.

Acting is not this movie's strong suit. Top-billed Lon Chaney Jr., who by this stage in his career was a barely employable alcoholic, is a puffy, bloated mess. Clearly unwell, he sometimes recites his lines so uncertainly that I suspect he was using cue-cards, he makes no attempt to disguise the American accent his extremely English character shouldn't have, and his over-the-top attempts to be menacing resemble the bluster of an obnoxious drunk arguing with a pub landlord who won't serve him any more booze. Fortunately a convenient plot-device means he's absent from most of the film. Diane Clare is sweetly helpless in a way which got her several major horror film rôles, but she's not much of an actress, and the most interesting thing about her is that the legendary Buffalo Bill Cody was allegedly her great-grandfather. And almost everybody else does their job well enough without making much of an impression, though the older actors are generally better than the youngsters.

However, it has enough flashes of brilliance to stand out as an interesting film that doesn't quite work. The activities of the reanimated witch provide real haunted-house creepiness, in particular the moment when both we and the hero first notice that something is very badly wrong indeed. It's a shame the main protagonists are so dull - did they have to be property developers? There's a yawning gap where the eccentric Van Helsing type who comes to their aid against the witches should be. It's also unfortunate that the embarrassing Chaney is in the picture at all, especially as his ancestor Vanessa Whitlock's resurrection renders his character completely irrelevant. And the half-baked romantic subplot pinched from "Romeo and Juliet" adds very little because both actors are far too lightweight. They don't seem to be all that passionate about each other either, which would help. Since this is a creepy film rather than a gory one, the fact that it's in black and white doesn't matter, but in most other respects it would have benefited from getting the full Hammer treatment. In particular, it needed at least one of their regular stars in the cast - the names Cushing, Lee and Price spring to mind. Instead, all they could afford was a sozzled has-been who cost a lot less than Karloff and was slightly less dead than Lugosi.

This is a solid horror film directed by Don Sharp, who directed some of Hammer’s less spectacular projects in the mid-sixties. It is probably best known now because of the involvement of top-billed Lon Chaney as the monumental Morgan Whitlock, who delivers a big performance for his big character. Often one-note furious, Chaney casts a large shadow over his more mannered co-stars – it is unusual to see him surrounded by British faces (including ‘Plague of the Zombies’s Diane Clare), in the same way that seeing Boris Karloff onscreen with Christopher Lee in ‘Curse of the Crimson Altar (1968)’ is a slightly surreal experience. Horror stars from different eras meeting has a charm all its own, and Chaney’s presence in picturesque, misty country scenes are pleasingly odd.

At this stage in his career, Chaney had a reputation for causing problems due to his excessive drinking. Apparently Sharp was very sympathetic to this and coaxed the best performance as he could from the veteran actor. Apart from addressing the character of Todd as (his girlfriend) Amy, Chaney is very good in a larger-than-life way.

My other favourite performance would have to be that of Vanessa Whitlock (Yvette Rees), the resurrected witch. She is creepily effective in all her scenes, particularly her first, when her appearance is slowly revealed as she is unearthed. Up until that point, this is quite a straight-laced film (in which Chaney’s performance stands out as being unrestrained) seemingly un-influenced by the blood-spattered horror revolution caused by Hammer in the late 1950’s. As events continue, however, things become progressively more manic folding with a spectacular finale.