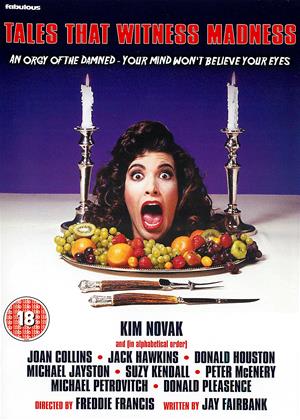 Reviews (2) of Tales That Witness Madness

Bizarre but not quite horrific .... - Tales That Witness Madness review by NP

Amicus were a film company who threatened to topple Hammer’s crown as the UK’s foremost horror specialists in the 1970s. They specialised in anthology films, and nothing proves their dominance in this field more than ‘Tales that Witness Madness’ – produced by World Film Services.

Not that ‘Tales…’ is particularly bad. It features a terrific cast, and is directed by the prolific and acclaimed Freddie Francis. The budget, while clearly not spectacular, is adequate to convey the stories being told.

For me, it is a combination of lacklustre stories and lack of pace that lets things down a little here. In order:

Dr. Tremayne (Donald Pleasence) explains to his colleague Dr. Nicholas (a dubbed Jack Hawkins in his last filmic appearance) how he has cured four special cases.

The first involves young Paul (a fine performance from Russell Lewis) who imagines he has a pet tiger to sort out his ever bickering parents.

The second sees antique dealer Tim (Peter McEnery) inheriting a penny farthing bicycle that transports him back in time.

Finally, Auriol (Kim Novak) embarks on a relationship with dashing Kimo (Michael Petrovitch, who is far more invested here than he was in the previous year’s quietly wonderful ‘Neither The Sea Nor The Sand’). However, he seems more interested in her daughter Ginny (Mary Tamm) for his own grisly reasons …

The stories are quite happy to live within their ludicrous premises, but somehow they – and the equally preposterous umbrella theme – miss the mark and it is difficult to pinpoint why. Perhaps it is because all stories feature events that cross the line between what is horrific and what is fantastic, with no variation from that. There is a feint psychedelia to the denouement that adds to the proceedings’ sense of unreality – and there is nothing wrong with that. It just doesn’t quite come off with the situations taking place in the identifiable drudgery of the real world. My score is 6 out of 10.

Tigers, evil trees, haunted penny farthings and cannibilism. What more could you want! - Tales That Witness Madness review by Spoons

Tales That Witness Madness is one of the weaker anthology movies that came out during this period, however that's not to say it's still enjoyable and entertaining hokum even if some of the tales border on the ridiculous. Well worth watching for sexy Joan Collins and the delicious Mary Tamm who is sadly no longer with us. As footnote I would like to say a big thank you to Cinema Paradiso for having films like this in their library. I love delving back into the archives to find old films like this and CP serves this purpose perfectly. Long may you continue. In my eyes DVD/BLU RAY rental is still the best way to watch films. Thank you.