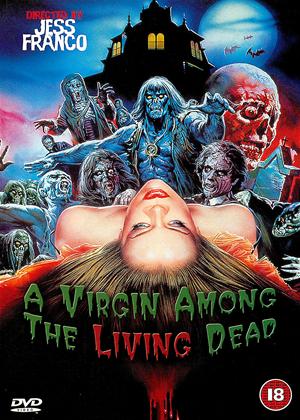 Not released
Night of the Assassins

Reviews (1) of A Virgin Among the Living Dead

Spoilers ... - A Virgin Among the Living Dead review by NP

This was made in 1971 but released two years later, and then again in 1981 as a zombie film with additional sequences directed by Jean Rollin. Of its many titles (Une Vierge chez les Morts Vivant · Christina, Princess of Eroticism · The Erotic Dreams of Christine · A Young Girl Among the Living Dead . Una Vergine tra gli Zombi), ‘A Virgin Among the Living Dead’ is among the least advisable as it gives away a major spoiler. There’s little use in carefully building up suspicion that the relatives Christina visits aren’t quite ‘normal’, when the truth behind their behaviour is revealed in the title!

Leading lady Christina Von Blanc is effective as young lady who visits a small castle for the reading of her father’s will. She has a look of Hammer starlet-at-the-time Veronica Carlson about her, but is required to do little more than cower in terror. Uncle Howard is played by Howard Vernon, part of Director Jess Franco’s ensemble cast and gives his head of family a certain menace.

I was drawn to this because of Rollin’s involvement, and also that certain reviews compare Franco’s work to that of the French director. Although this film has a certain low-budget appeal, there is little of the poetry here that Rollin brought to his equally under-funded work. Having said that, there is also a weirdness to the narrative and eccentricity to the performances that are quite interesting.

The constant zooms in and out of locations and items often seems haphazard and unnecessary, but there are times (when Christina goes for a night-time wander prior to finding a hanged man) when the approach effectively communicates a trance-like state. The ending, too, is extremely effective – by far the best sequence in the film. Although Christina’s fate is tragic, it is handled beautifully, with the rest of the ‘family’ standing by, seemingly in a somnambulist state with a haunting incidental score.