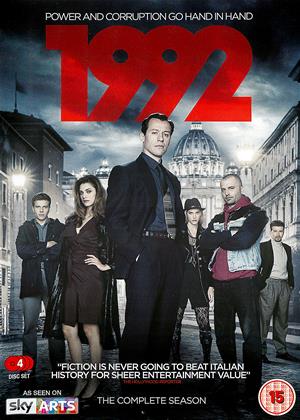 This film is a docudrama, but fails to summon up the depth of interest sufficient to carry the viewer through a convoluted plot.  The objective of this film is to show the events that took place in 1992, however, the pace of the film is too brisk, and the Italian language is spoken at over 180-words per minute.  This means that the subtitles have to keep pace.  The resultant is, if you read the subtitles, you don't see the film.  If you watch the film, you won't have time to read the subtitles.  There are hundreds of facts to take in.  These become more a test of mental agility than entertainment and not a film that anybody but the Italians could enjoy, for it is about their country.

Cinema, in its truest sense, is where the picture tells the story for 80% of the time, the script playing a supporting role.  This film was never made for export and thus, like the consequences of muttered Americanese without subtitles or the Italian language rolling off the tongue far more quickly than most other European languages, such films are made with the indigenous in mind ... nobody else.

I got about half-an-hour into this film, but wasn't enjoying it one little bit, for there wasn't time to take it in, or remember who was who and who said what, simply because it starts well, but seemingly runs out of time, when everything has to be rushed.  It was never intended for export.  It is hoped that, one day, it will be remade with a measured pace.  It should always be remembered that documentaries are teaching aids.  If you learn little or nothing from a documentary ... it has failed.