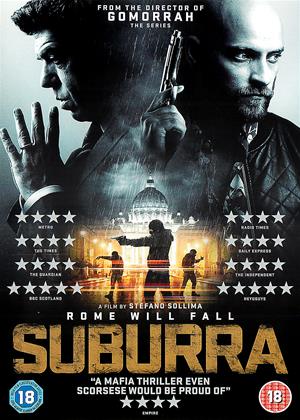 Suburra follows the machinations of a number of members of high-level heavyweight crime gangs in Rome, as they vie for power. They also competer for a 'piece of the action' in a proposed water-front development organised by the mafia through their 'fixer' - the enigmatic and powerful 'Samurai'. He sets about eliminating all obstacles to the plan using either 'silver or lead' (to use a term used in the series Narcos).

Relatively innocent characters get thrown into the maelstrom of events and gang rivalries spill into bloody street conflicts. Sub-plots feature revenge as the primary motivation, with greed, sex and occasionally loyalty thrown in for good measure. It's a sinful concoction!

The action is very violent, the locations and shooting are slick, the hedonism extreme and the incidents graphic. It's not a film for the easily shocked. Like Trainspotting in the 90s the film has a modern 'cool' feel about it, with an occasionally loud electronic sound-track echoing the clubland lifestyle of its underworld denizens. There are moments that capture both the beauty of Rome as well as plenty of its seedier side.

The film captures the rivalries between different gangster groups and politicians, and their approach to business - the old school mafioso - Samurai - equally adept at negotiation as well as strong-arm tactics - an iron fist in a velvet glove, the newer generation of hedonistic 'hipster' thugs and the so-called 'gypsies', who play by their own rules.

The plot, pace, filming and characterisations are superb - excellent technical quality and acting - as you expect from the best Italian cinema: few do style and attention to detail as well as the Italians. It makes a nice change to see a European crime film of this quality - easily up there and surpassing the best that Hollywood has to offer.

It also asks questions of its audience about character, and what one would do when faced with tough moral choices. I'm glad I was watching an entertainment, rather than being involved in the ruthless yet engrossing world depicted.

This film starts slowly - but stay with it. Because it slowly grows into an exquisitely corrupt and violent, almost Shakespearean, family vendetta drama set over 5 days in the resort of Ostia near Rome (the old port Ostia Antica is 2 miles inland and can be visited easily - more compact than Pompeii but similar, with snack bar, bath house, brothel etc excavated).

Particularly good and authentic is the gypsy mafia Rome family - UK TV would probably not allow such a depiction of an 'ethnic minority'; however, having sat on a train from the airport to Rome city centre with just such a family, I can say the depiction is spot on! The boss is particularly repulsive and amoral; but not in a pantomime villain way - these are real 3d characters.

As with all in Italy, the rich, powerful Catholic church is involved as are politicians - it';s the way Italy operates. And the EU perhaps.

The music is superb too. There are some loose ends not tied up or clear, and a tad confusing, and the start is rather slow - too much so, hence 4 stars not 5.

I am surprised I liked this so much as the director also did Gomorrah which I did not like much and I hated the TV series and watched just 2 episodes.

But this, I would watch again - it is that good. No spoilers but the third act is worth waiting for.

A new sort of mafia movie - tawdry, corrupt, 21st century. I loved it!