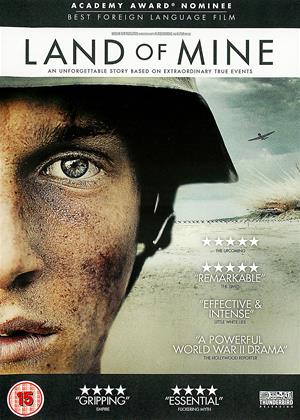 Almost give it 5 star - Land of Mine review by SM

A riverting true story. I guess you know the story and if you can put up subtitles then you will really enjoy this movie. Although bleak at times that is how the story is but the story, acting and direction is second to none. When you get a little sick of big blockbuster movies this is a great way to enjoy a movie without all those special effects. Recommended for a solid piece of dramatic movie making.

Sad Reality - Land of Mine review by JD

You can understand the feelings of the Danes, and at first have little sympathy with the young German soldiers who have to clear the coastal minefields ( minefields laid by the Germans during the war).

However life is never that simple, and this exciting, and well acted, tale allows a sympathetic ending, after illustrating the loss of life as the minefields are cleared.

Watch it. - Land of Mine review by CM

I thought I would not be able to watch this. For some time I covered my eyes as I knew what was coming. It did. And I kept watching. I saw in one review that it is an anti war film. I am not sure it is. I think it a film to show us not to hate. That the hated enemy is not evil but vulnerable and human and the same flesh and blood as we. It is very well done and I recommend it.

Seeing a different side - Land of Mine review by PW

Unusually the film allowed us to feel sympathy for the young German soldiers even before we got to know them. They were treated very harshly by the sergeant yet knowing what we know about German brutality one could feel sympathy for him too. Whatever the merits of war it will always leave a heart breaking mess and this film demonstrated that well

I'm never sure when it comes to subtitled films BUT this is exceptional. Watched with my wife and daughter (who didn't know what I'd ordered) but we all enjoyed it. The story is really interesting, the loathing and violence is kept in check but still real whilst the characters and screenplay are almost perfect. There is a scene which none of us could watch (because you know what's going to happen) but apart from that, this is a solid good watch. The relationships and emotions are what sets this film apart and I thoroughly recommend it. One could argue the end was a little predictable but I liked it (and it felt like the right thing to do).

This is an excellent film about something I knew nothing about - the vast number of German mines laid on beaches in Denmark, as the Nazis expected an Allied invasion there.

It reminds me somewhat of an excellent TV series I watched as a kid in 1980 called DANGER UXB. As with that, it's people trying to defuse live bombs so some will inevitably be blown to pieces (no spoiler there, methinks).The statistics given at the end of the film are shocking: 2000 German prisoners used to defuse mines in Denmark and half of them were killed or seriously injured. Still, that was better than being captured by the Russians - 90% of their German prisoners died. Perhaps the best bet for a German soldier would be to be captured by the British - you won't be shot or blown up or starved to death, just put to work on the land or on building projects to repair war damage.

Which is why the shocking and unnecessary scene of some British soldiers abusing the Germans is inaccurate and unnecessary. The prisoners claim the British would shoot them too, though this would be a natural fear - but really, it is disgusting how films do this, make up history - US films are ALWAYS doing it, and often insulting the British too, as with U571 or The Patriot showing British soldiers doing atrocities they never did or many more examples. That REALLY annoyed me.

So 4 stars. Just. But the title LAND OF MINE is stupid and an insult to the quality of this film and the men it commemorates. Couldn't the translator have used some decorum and come up with a respectful title?

A couple of predictable bits but also some surprises.

Under the Sand - Land of Mine review by RW

A harowing, yet gripping and complex untold story; not an easy watch, but well worth anyone’s time. The production, acting and cinematography is superb. ‘Life’s not tidy’.

Tense, upsetting but also uplifting - Land of Mine review by TB

This is one of the best war related films that I’ve seen and it’s based on true events, which makes it all the more special. The film takes you on a tense and emotional journey in lives of young German prisoners of war who are forced into clearing mines after the war. There are a number of young actors and the acting by every single one and their sergeant is superb. Yet what really makes this film is the rollercoaster ride of the ever changing relationship between the young prisoners and the opposing sergeant whom is in charge of them. The relationship and the film as a whole provides tension, sadness but also an uplifting and glowing light of humanity in the darkest of times. Excellent film!

Interesting film about the massive clearance of German WW2 mines of the beaches of Denmark. The work is entrusted to young German soldiers probably roped into the war during the latter days of it, with the proviso they can go home when all the mines are cleared. A hard nosed sergeant determined to get the job done no matter what, as he has to report to a more senior officer who seems to have got to where he has by hanging onto the shirt tails of his more senior officers. What struck me was the fact that the Danes wanted the beaches cleared at what ever cost, but at the same time seemed to have had little knowledge or understanding of what they were dealing with it!

Interesting idea poorly executed - Land of Mine review by Alphaville

Based on a true story of young German soldiers made to clear land mines from Danish beaches after losing WW2, this is an interesting idea under-developed in the filming. Having the young men brutalised by a sadistic Danish commander is heavy-handed and unpleasant to watch. The tension of the land-mine scenes is lost because of writer/director Martin Zandvliet’s muted direction. His avowed aim of exploring an ‘eye for an eye’ mentality (see DVD extras) needs both more subtlety and more heightened drama to turn this into a riveting movie.