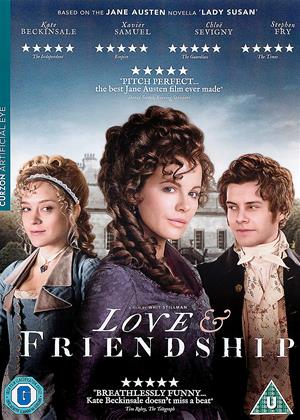 Reviews (7) of Love and Friendship

A New, and Different, Jane Austen - Love and Friendship review by MD

Just when you thought it impossible that any further ORIGINAL Jane Austen work could be put on celluloid, this turns up. And not only is it new, it's also very different.

Okay, so the period setting is the same, and the recognisable Austen characters are not too far away, but both the story itself and the manner of telling it are far from what we have come to expect of Austen adaptations. This is a fast-paced tale, full of almost soap opera-like content, which focuses on a leading lady who is anything but an Elizabeth Bennett or Emma Woodhouse. In fact, she's a bitch. And a brilliantly played one, too, the surprising casting of Kate Beckinsdale working a treat.

I loved the script, which is both literate and very witty, and the fact that even the more minor characters are given reasonable roles makes for a satisfyingly complete experience, all the more so because many of them, and the situations they find themselves in, are still very relevant to our world today.

Of course, it will not be to everyone's taste, but I think both Austen fans and those new to her work can find a great deal to admire and enjoy in this refreshing 'update' to her filmed works.

I admit, I was a bit confused by this film, all the more so by other reviews. I took it to be an Austen spoof. I'm not an Austen fan (all that "sly wit" seems more like statin' the bleedin' obvious , but in arch early 19th c tones) so the idea of a spoof was very attractive. And the opening scenes did indeed seem to be sending up the genre (descriptive subtitles with character low-downs were a nice touch), most enjoyably.

But then the parody trickled away and it seemed to turn into an earnest story about the misadventures of our antiheroine - played with gusto by Kate Beckinsale, another phenomenon I've always suspected was over-rated. But not any more; she's delightfully deadpan in this.

Still, spoof or not, it's good fun. Most of all, I liked Tom Bennett as the idiotic but rather adorable Sir James Martin (as another nervous chatterer who has had some agonising social moments, I could actually relate to the poor, hapless soul...) And the settings are glorious.

One thing struck me as odd: The editing. Characters repeat themselves (a joke about the ghastly Lady Susan not "insulting" her impoverished companion with payment is good....... But not good enough to need telling twice..) and scenes jump abruptly; at one point, we discover that a couple who had been Just Good Friends - have become engaged. But there's been no lead-up to this. A potential bit of good drama is just ignored. It makes the overall effect jarring, when, with a film like this, you want to be carried along on a smooth, enjoyable ride.

Definitely worth a look, whether you love or hate Austen. But it's not the blast of fresh air (send-up or not) the rave reviews led me to expect..

Clever and amusing - Love and Friendship review by SA

I really enjoyed this adaptation of Jane Austen s unfinished book. We will never know how the author herself would have developed but it had the makings of something very special and new from her other works. This film brings it to life very enjoyably and is superbly cast and acted. Great fun.

We lost interest pretty close to the start. Too many characters and a hard to fathom setup meant we gave up trying and were disappointed at the way this movie had been represented to us.

Period peace of worth - Love and Friendship review by jw

Ever since BBC's Pride and Prejudice with Colin Firth, I've followed many period pieces wth my tongue hanging out. Eager to revisit the hankering I had for P and P. This film is the most satisfying since. I don't know how the makers do it, but it works for me.

Boring - Love and Friendship review by BE

Not all that enamoured with the writings of Jane Austen. This film did nothing to enhance my opinion. Difficulty in relating to the historic life of the idle rich with their arrogant and unreal perspective of life in those times. Not for me.

This cod-Austen shenanigans has less substance than the emperor’s clothes. The cast do their best with the stilted dialogue but can do little with their stylised characters, which have the depth of cardboard. On wishes devoutly that they wouldst vouchsafe their smug opinions less and do something interesting.

In any case, the film opens with so many confusing characters, whose relationships are indicated by brief subtitles, that many viewers will soon give up caring. This difficulty is even hinted at by one of the cast on the ‘Making Of’ DVD extra. Jaded critics found the stilted dialogue witty. The viewer is more likely to find it wince-inducing.

The film is based on an early Austen novella but it plays like a misconceived am-dram concocted by a talentless Austen wannabe who just doesn’t get her. The culprit is writer/director and arthouse favourite Whit Stillman, whose visual sense is as perfunctory as ever. Point the camera and shoot. The whole adds up to a stagey exercise in emptiness. It even makes Pride and Prejudice and Zombies seem like a masterpiece. One star for the production values and costumes.

Mr. Whit Stillman may not be known for his prolific tendencies in regards to directing movies, but given quality beats quantity any time of the day – perhaps this would end up for the best of everyone involved. Hi latest spell dubbed Love & Friendship screams quality of the highest order, which is only logical insofar Jane Austen adaptations go. Also, Whit Stillman may not be famous for producing cinematic masterpieces, but sure as hell he can direct good dialogue whenever necessary. What I’m trying to say is that Love & Friendship is a very good and unique movie-going experience that will leave you wanting for more.

Let’s not kid ourselves: Kate Beckinsale rocks. Her performance as Lady Susan Vernon oscillates somewhere between a 1700’s period diva and a witty chat-chitter whose unquenchable thirst for gossip puts her right there with the masters of old, like Madam Bovary for example. This comparison is not without precedence, for one thing Beckinsale excels at in Love & Friendship is tittle-tattle in its purest form – thus providing plenty of material for both flamboyant men and women to enjoy.

The supporting cast in nothing short of extraordinary. Stephen Fry packs just the right amount of snazzy to not become overly intrusive (as he is usually remembered for), and Chloe Sevigny portraying Alicia Johnson comes off as extremely confident and capable lady who knows what she wants from life, which you correctly guessed is more suitors to appease to her romantic needs and desires.

Worthy of mention is also how Love & Friendship works on many levels: first as a period piece with accurate clothing choices and historical accuracies; second, as a spoof of the same period piece it boldly encourages; and third, as a standout feature that holds its own ground.

Since this is a film mostly centered on women and their take on life, the men characters come as quite a surprise when all things are taken into consideration. Reginald DeCourcy, the alias behind actor Xavier Samuel, is a young nobleman who is almost clueless toward Susan’s advances. Tom Bennett however steals the show as the cocky Sir James Martin who stops at nothing to get what he wants.

Notice how I mostly wrote on characters, and this is by no means a mere coincidence. Since Jane Austen can conjure best how people interact, feel and do - Love & Friendship perfectly translates all of that and more on screen. Sure, the period elements are all there, but they exist only to add to an otherwise perfect story driven forward by pure intellectual wit.

It’d be truly a shame if you miss Whit Stillman’s masterpiece.