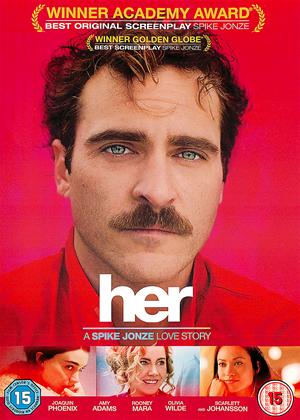 Lots of philosophical questions to ponder - Her review by CP Customer

Enjoyed watching this film. Fascinating observing the main character learn through his interactions with his OS lover how to relate openly to a romantic partner, something that he hadn't achieved in his marriage, which leaves the hope that he will be able to take what he has learned into his next relationship. Photography was beautiful, acting believable. As in many movies, the audience is asked to suspend belief, and to inhabit briefly an imaginary future world. Lots of philosophical questions to ponder about where technology is taking us, the nature of reality etc.

Overlong and overtangled movie, which should have been an episode of The Twilight Zone - Her review by PV

OK, so this film is not unpleasant, though one wonders if the endless focus on relationships and explicit aural scenes are absolutely necessary.

It is a not bad film but way overlong and feels it. That is because the story is so slight the movies is stuffed with padding and unnecessary subplots. It could have been a great half hour episode of a Twilight Zone style TV series. It is basically a short story which has been padded out to be a novel.

One issue with this: all the characters become extremely irritating after a while, from the main character to the subplots. The disembodied voice of 'Her' is probably the least irritating.

Difficult to get emotion into a relationship with a machine - but it was done better almost 40 years ago in a SciFi film when a computer sings Daisy Daisy of course...

The twist is fun but not surprising enough to pay off the time invested in the previous 2 hours.

So, all in all, very average. No idea why it was nominated for an Oscar. But then Gravity won, and that was worse...

Her - Her review by CP Customer

I thought this movie was depressing and ridiculous and a waste of 1 1/2 hours of my life. Self indulgent, rubbish.

Annoying adverts - Her review by IJ

Before the film starts you are subject to 5 long adverts for films which you are unable to skip through. Extremely irritating. If I had known this awful marketing practice was present beforehand I would not have ordered it. If this gets widesespread, it will kill the DVD.

Hit delete - Her review by AS

I got this to watch, of course, because I love Joaquin's acting, and watching a dedicated Vegan in action helps too. He acted as well as ever, and it must have been pretty difficult as most of the film is taken up with him alone. The sexual aural and proxy porn was embarrassing, vile, and illogical. A personality developed on a supercomputer would surely have better things to interest it than that! The film was disturbing in that so many people were choosing to have relationships with the computer - and it was essentially only one they all shared, no surprise there - instead of working hard to develop normal human relationships and take note of their surroundings. Even when Joaquin's character meets his nearly-ex-wife, he cannot communicate with her enough to express his real feelings yet can with a piece of electronic machinery! Daft. The end was very predictable and showed that humans had learned nothing from the pointless experience of having a 'relationship' with a non-physical entity. This film was so dull and silly that my husband and I took a break halfway through, did more interesting things like sit in the garden watching the breeze in the trees and the birds feeding and then went back to it after a couple of hours. Definitely not a good film.

Director Spike Jonze has crafted stories with some of the strangest concepts imaginable and yet his recent tale is one that is maybe a little bit close then some people might imagine. However Jonze crafts this around a very real need for intimacy that is heart warming but at its core a little bit corrupted by the subject matter.

Her follows Theodore (Joaquin Phoenix), a letter writer who writes couples letters to one another. He is desperately alone except for one friend, Amy (Amy Adams). When he buys a new operating system he doesn’t realise that she is an artificial intelligence and when Theodore and Samantha (Scarlett Johansson), his new OS meet they hit it off from the start. However the relationship has some inherent problems along the way.

The lack of connection in Her is astounding as people act naturally but also revel in isolation as if some kind of abject punishment for past events. For Theodore its his marriage to his soon to be ex wife Catherine (Rooney Mara), an opinionated and manipulative force that Theodore created as he sees it. His ideas about relationships and love are twisted.

Phoenix is perfect as Theodore, he gets to the core of this quiet soul and brings him back to life with the help of an equally impressive voice performance by Johansson as the inquisitive and loving Samantha. They honestly make a good couple, a dysfunctional and slightly unconventional one but a couple none the less.

However there lies the inherent flaw in Her, it never really presents anything to fight for because we don’t understand. Sure the idea of falling in love with a consumer item can happen momentarily (I remember the pleasures of a new game on the N64) but this kind of devotion is beyond comprehension for some and it makes what could be a touching relationship slightly cold and distant, undermining Jonze and the beautifully designed and shot film he has created.