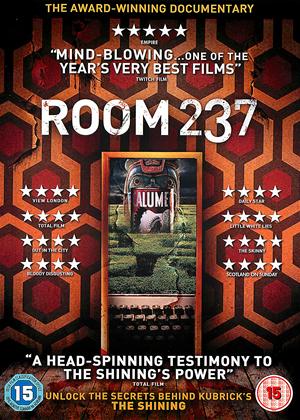 This utterly bizarre documentary is a fascinating glimpse into the mindset of people who sincerely believe totally implausible conspiracy theories. It pulls off the very sly trick of picking a subject which neatly sidesteps most of the political ideology that usually surrounds such belief-systems, and simply gives us a total of nine increasingly bonkers perspectives on something which appears to be perfectly straightforward - a horror movie based on a best-selling novel by Stephen King.

But if you're absolutely determined to look for hidden meanings where there are none, there's plenty of strange incidental detail to play with, given Stanley Kubrick's obsessive-compulsive approach to film-making. Some of the "theorists" are more coherent than others. The lady who's so determined to prove the entire movie is somehow about Minotaurs that she turns a briefly-glimpsed poster into the second-most-important character in the film, despite the fact that it doesn't actually show a Minotaur, borders on total incoherence.

And the fellow who thinks that, despite the complete absence of any Native American characters, or any suggestion that Native Americans might be involved beyond one throwaway comment that being build on an Indian burial site has given the hotel a spooky reputation from the get-go (a hackneyed idea Stephen King has used several times), the film is entirely about America's brutal treatment of its native population, admits from the outset that he reached this conclusion in a totally arbitrary way before he'd even seen the movie, hence his struggle to attach more importance to inanimate objects which appear for a few seconds in the background than the actual characters or story, comes across as far less sane than he thinks he is, and quite incapable of understanding why.

The most outrageously nutty contributor actually makes a comparatively good case for the entire film being Stanley Kubrick's confession that he faked NASA's alleged live footage of the Moon landings. Comparatively good compared to some of the other people in this film, anyway. He even tries to gain credibility by disassociating himself from those nutters who think we didn't really go to the Moon, though without explaining why, if we in fact went there, Stanley Kubrick had to fake any footage at all. Or indeed mentioning that this idea derives from an obscure French TV documentary that was a very deliberate joke.

It's not perfect. The non-stop flow of information can be tiring, especially during the slow patches. The complete absence of any personal information about these people other than what they choose to say about themselves is a pity - we don't even find out what any of them look like. And for somebody like me, the pretty much random B-movie clips used to illustrate some of the comments are very distracting - "Oh look, The Brain From Planet Arous!" is the kind of thought guaranteed to break whatever train of thought you previously had. But overall it's a fascinatingly mind-bending exploration of the way some people insist on reading far too much into nothing at all.

As the previous reviewer states, this is an utterly bizarre documentary. I just don't understand the 4 star rating. This 'documentary' is a sequence of unidentified people narrating increasingly ridiculous associations of scenes in the film and interpreting outlandish meanings to them. I watched this in disbelief for almost an hour, sure that it was just a comedy spoof, but it becomes clear the makers actually believe this stuff. I had to give up after the long sequence of a person interpreting the film as a proof the moon landings were faked (by Stanley Kubrick himself, no less). It might be worth watching to see just how deluded some people actually are, but otherwise it is just scary that there are people out there who could believe things like this. The fact that the various 'meanings' 'divined' frequently contradict each other is ignored.The blurb states this won an award, but the mind boggles what award that could have been....