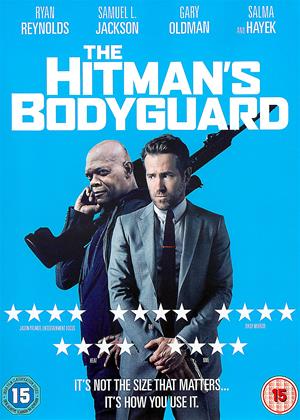 Reviews (20) of The Hitman's Bodyguard

Lots of bent cars - The Hitman's Bodyguard review by NC

Normal amalgam of smashed cars and dead people all over the place. Handy that the badies run into the bullets and their guns appear to fire at odds to where they point them ,but is all Roadrunner type violence.

Going way back to Gauntlet with Clint on this one...........witness to get to the court etc.

Tongue in cheek action and comedy. Nothing new but enjoyable to watch. Some of the action was worth a rewind to watch again.

Bodyguard/Hitman where des one end and the other begin ? - The Hitman's Bodyguard review by porky

Very Entertaining ,But pretty much Formula Fulfilling Action Movie. Plenty of Comedy along the way and a Very Funny side performance by Salma Hayek as the Hitman's Wife .

Some great comedy moments and some of chase scenes were fantastic!

As a previous review said, nothing new, but very enjoyable.

Terrible.....corny lines, dull action......switched off after 20 odd minutes.....I only do that if a film really grates which this did!

An old-school caper about a hitman (Samuel L. Jackson) and his bodyguard (Ryan Reynolds). Cue gunfights with baddies who can’t shoot straight, sub-Tarantino banter, a high swearword count and even a clichéd funky soundtrack. Worse than a rerun of a poor Starsky and Hutch episode.

Most Enjoyable - The Hitman's Bodyguard review by DJ

Nothing more to add than the previous review , very enjoyable , light hearted , plenty of tongue in cheek action. Seemed like Ryan was doing an audition for the next James Bond , Roger Moore style - and , on this performance, he would get my vote long before dour McMafia man. Recommended.

Watchable (got to the end) and some enjoyable moments. However, I thought the relationship between Samuel and Ryan could have been so much more. This is a fault in the screenplay and nothing to do with the acting talents. Almost felt like they were in separate films at times. So worth a watch but disappointed that it could have been so much better. My daughter agrees so not just me!

light and enjoyable - The Hitman's Bodyguard review by OP

Good laugh - The Hitman's Bodyguard review by AM

I enjoyed this lighthearted caper. The airbag scene made me lol. The soundtrack was pretty good too. I thought the banter between the leads was excellent

Ryan Reynolds and Samuel L. Jackson have the makings of a great duo, both exuding charisma to spare in their individual roles. So you can imagine my disappointment when The Hitman’s Bodyguard never fully capitalizes on their true potential. A great film can take Jackson’s knack for saying mouthf**ker like nobody’s business and use it to great effect. A lesser film such as this uses it as a bullet-point for funny.

The two at least seem to be in their element, more or less, for a ballet of blood and bullets. Reynolds plays Michael Bryce, an expert bodyguard that takes every precaution, only to be kicked down in rank when he loses a client to sniper fire. While I may not know the specifics of the bodyguard tiers, his lesser jobs still seem to involve legions of assassins and exploding vehicles. Maybe his status has something to do with his living arrangements and pay. It’s the only reason I could fathom why he keeps bottles of urine in his car for no reason. Well, other than the simplicity of pee humor.

He may have landed the ultimate gig to kick him back up into the big leagues when given a mission as the plan B of guarding convicted hitman Darius Kincaid (Jackson). An unlikely bond could brew between them as Michael must escort Kincaid to a crucial hearing against the evil dictator Vladislav Dukhovich (Gary Oldman). But they already have a history as it turns out Darius was responsible for the kill that knocked Michael down the bodyguard totem pole. And therein lies the biggest problem with Hitman’s Bodyguard, artificially manufacturing several scenes meant to be funny or gritty, fueled by a banal supply of Reynold’s shouting and Jackson’s cackling.

This formula would be fine if it weren’t for the film’s fiercely fluctuating tones. When Darius’ first convoy is attacked, it’s exceptionally violent with security forces being shot to death until they’re a bloody pulp. This isn’t the only scene that greatly clashes with the darkly comedic buddy picture aspect. Darius reveals in a flashback that he grew up in the deep South where racism claimed his father and bloody revenge claimed his soul. If you thought that scene feels out of place with the Southern choir and melodramatic staging, I thought the film had completely shifted gears when an intense chase leads to a torture dungeon of heavy metal music and gruesome kills.

Reynolds and Jackson are not the only ones who feel underused. Gary Oldman can be a great villain, but not in a film that seems to slap him with the standard foreign dictator digs, merely killing civilians and corrupting officials with pointless political babble buried in an accent. Just as confined is Salma Hayek, playing Darius incarcerated wife. She’s given a rather thankless role of spending the whole movie in a prison cell trying to amp up how badass her husband can be, but damned if she doesn’t try to put everything she has into this small part.

There are still a few scenes that stick out with the charm I was seeking from this team-up, amid awkward tone shifts and some of the least impressive special effects I’ve seen for an action picture. Highlights include Jackson singing along with a bus full of nuns, much to the chagrin of Reynolds’ annoyance, and a rather brilliant car chase that ends with a car of exploding bullets. There is additionally another scene in a car where the radio is busted and they battle each other with songs, to such a hilarious degree I hope it would play some role in the climax, rather than just a standard shootout with the bad guy being shot off the roof. And for as absurd as it is that Reynolds can somehow survive being flung through a windshield when it seems that every other character is ripped to shreds, there’s a certain hilarity to its showcase at how Jackson is just as confused as the audience is at such a stunt.

While there are a few thrills and smiles to be had, I was ultimately dismayed that the bulk of the comedy revolves around Reynolds and Jackson cursing at each other, trying to see who can spout expletives the loudest. There’s gotta be more to their comedy than this. It really says something when the funniest thing about The Hitman’s Bodyguard is the poster, boasting Reynolds and Jackson in a parody image of The Bodyguard, with Ryan Reynolds holding Samuel L. Jackson in his arms.