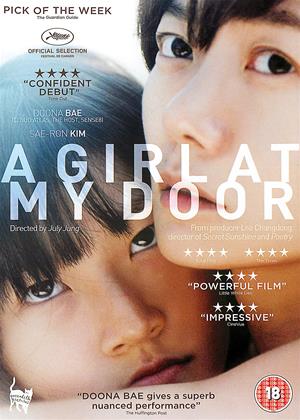 Synopsis:
Young-nam (Doona Bae) was a top graduate of the Korean police academy, but due to 'misconduct' is transferred to a post at a small seaside village. On her first patrol she encounters the mysterious Dohee; a young girl excluded by her local community. As Young-nam adapts to her new life, she witnesses Dohee's situation and is compelled to protect the girl from her family by letting her move in. All is well with this unconventional arrangement until Dohee's drunken father decides he wants her back.
Actors:
Doona Bae, Sae-ron Kim, Sae-Byeok Song, Hie-jin Jang, Min-jae Kim, Seong-kun Mun
Directors:
July Jung
Producers:
Chang-dong Lee, Jun-dong Lee
Writers:
July Jung
Aka:
Dohee-Ya
Studio:
Peccadillo Pictures
Genres:
Drama
Countries:
Korea

Sign up
How to Use Guys with Secret Tips

Absorbnig and Startling - A Girl at My Door review by Alphaville

Transferred to the sticks for an undisclosed misdeed, police chief Doona Bae finds backwater law enforcement difficult to deal with, especially when she gets landed with Kim Sae-ron, a troubled 14yo whose father beats her. Sounds like the kind of soapy lo-key bore that gets lottery funding in the UK but you can expect something infinitely more beautiful, more imaginative, more progressive and more exciting from modern South Korean cinema.

As usual, avoid all reviews with spoilers about theme and plot. As our heroine is increasingly trapped by circumstances beyond her control, the film develops into a thrilling roller-coaster of plot and emotion that will have you glued to your seat. As danger closes in on the delicate but determined police chief, you’ll be rooting for her to win through. Can she save the girl? Can she save herself?

A beautifully crafted, startling film by first-time director July Jung that goes where no UK or Hollywood film would dare to tread. Typical of the ground-breaking South Korean New Wave, this is engrossing, thought-provoking cinema that will stay with you.

Superb Korean film - A Girl at My Door review by TB

I won’t describe the premise of this film as that can be discovered from reading the film synopsis on here.

This is a film that’s a complete triumph for modern Korean cinema and a film that’s incredibly brave in tackling multiple evocative subjects such as alcoholism, child abuse, homosexuality and illegal immigrants.

A beautiful and tender relationship is gradually built between Young-nam and village outcast Dohee but is tested as Young-nam at times is battling against the whole village and their ways, while tying to deal with her own demons.

The film makes you feel heartbreak, frustration, anger and a huge amount of pity and empathy for both lead characters (who both put in sensational acting performances). The film takes several twists and turns at the end to give it impressive depth and despite The actions of Young-nam being totally innocent she gets tangled in a web of cultural differences and misunderstanding.

However, I won’t ruin the ending but urge you to watch his fantastic film to find out if the truth comes out and if the good win the day.

A simply stunning film about an abused and cast out little girl who just wants a normal, unbroken family and to know how it feels to be loved. Such an incredibly sad and thought provoking, yet rewarding film!