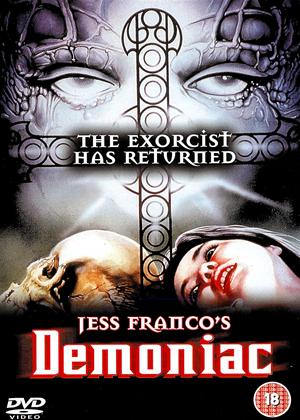 Synopsis:
Vogel, a newspaperman, works for a scandal sheet, whose editor in chief, Raymond Bordier, flirts with his secretary, Ann. Raymond and Ann use the castle of a count and countess to organize "Black Masses" with tortures that are so well simulated that the illusion of reality is complete. Their guests appreciate the excitement which is offered to them. Vogel, a former priest and a strange, paranoiac, mystical religious fanatic, walks by accident into one of these festivities. Believing he has witnessed the real thing he decides to exorcize the participants so as to make them confess that they are under the influence of Satan.
To obtain this confession, he tortures them to death according to Medieval rites. Only Ann, whom Vogel is madly in love can escape death.
Actors:
Lina Romay, Catherine Lafferière, Jesús Franco, Lynn Monteil, Pierre Taylou, Roger Germanes, Monica Swinn, France Nicolas, Sam Marée, François Guillaume, Caroline Rivière, Philippe Lebrun, Olivier Mathot, Antonio de Cabo, Maria Forlan, Richard Bigotini, Claude Boisson, Raymond Hardy, Claude Sendron, Daniel White
Directors:
Jesús Franco
Writers:
Henri Bral de Boitselier, Jesús Franco
Aka:
L'éventreur de Notre-Dame
Studio:
Arrow Films
Genres:
Horror
Countries:
France

Sometimes, watching a film by Spanish Director Jess Franco only covers half the experience. The other half is in tracking down the definitive version of the film, or even working out which the definitive version actually is. ‘Demoniac’ seems to be the name given to the dubbed version of X-rated ‘Sexorcismes (1975)’, and/or ‘El sádico de Notre-Dame (1979)’, which was expanded to give, as Franco puts it, ‘greater character motivation’. Possibly then, this is the original version, before additional footage was added.

Lina Romay, nearly naked, star-shaped and chained to a rack, is being tortured by a similarly clad female. In a favourite Franco trick, her indignities are revealed as being part of a show. When it’s over, an audience applauds politely. By day, she’s Anna, secretary to Raymond (Pierre Taylou) at ‘Garter and Dagger’ magazine (together they stage sadomasochistic shows in a sleazy Parisian underworld). An occasional contributor to the publication is Mathis Vogel played by Franco. He is not a convincing actor. His decision to cast himself in many of his films is odd (although the characters he plays often interact with a bevy of half-naked females, which may well explain the choice). There are many things to enjoy about ‘Demoniac’ – most of them provided by Romay who doesn’t remain troubled by clothing for any length of time.

Vogel is a defrocked Priest who also secretly tortures nude females in a nearby rented room. The ‘justification’ is, he is unhinged enough to convince himself he is ‘purifying’ these people, taking his victims from such rituals as the one that opened the story, believing them to be genuine black mass events. One couple is visited in their hotel directly after a protracted orgy scene, where the elderly husband is remonstrating with his young wife for enjoying herself too much. When she replies that anything else would be a bore, he replies, “I just don’t like looking ridiculous,” which must surely be irony, as he is sporting the most appalling silvery white wig.

This is far from my favourite Franco film, but like them all, it has merits. The camera-work is often ham-fisted, swooping in on …. nothing, and then pulling back again. There’s no sense of drama or pace, and Franco injects no character into Vogel, so his motivation seems arbitrary. “I am the sword of the Lord,” indeed! However, the sleazy underworld of a murky Paris is nicely conveyed, and those who enjoy the hirsute pleasures of 1970’s pornography have plenty to enjoy here. However, the final light-hearted lines of banter between the cops at the end, seem to have been drafted in from another film.