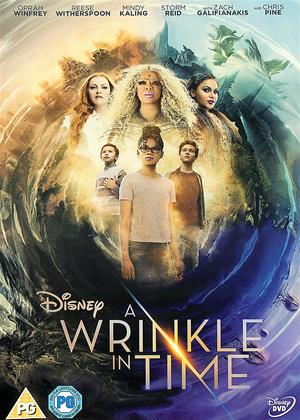 Reviews (7) of A Wrinkle in Time

Truly awful - A Wrinkle in Time review by PC

I understand that this is a children's film but I am sure they would be as bored as I was watching this mess of a film. The special effects are loud but manage to be uninteresting at the same time and the storyline meanders at best. Normally good actors appear to think they are in panto with performances that are just plain annoying. Avoid!

Avoid - A Wrinkle in Time review by ME

I never write reviews, but this film (if you can call it that) was truly appalling. Pick something else, please!!!

Absolutely dreadful, just don't rent it and save a few hours of your life which will be wasted watching it. It really is the biggest load of rubbish I've ever watched with my kids

Diversity box-ticking dull movie - like a Poundland Wizard of Oz (watch that instead!!!) - A Wrinkle in Time review by PV

OK so we all know the way Hollywood has gone diversity-nuts, so you WILL be seeing many more movies where white men are only in token roles and women and/or ethnic minorities have all the others (apparently that's representative of society - but 10% white males is NOT representative of the US or the UK!). How is racism and sexism against white men and boys better than the same against women and girls eh? IT ISN'T, not even if you name it 'diversity' and give it group hugs.

If you want to watch a movie with a central girl character in a quest then watch the class The Wizard of Oz and ignore this mediocre trash.

This is a vomit-inducing Disneyfication of a dreadful storyline - as bad as the 2003 version of the same film but (as bizarre as it may seem), slightly worse as the children's voices are squeakily beyond an adult's hearing range, so the dialogue is very often incomprehensible due to the volume of mouse noises that pass for a conversation. As for the story being a 'timeless classic' I have never heard of it and hopefully time will swallow up any future remakes of this awful film that in itself is incomprehensible gibberish.

Flashy disappointment - A Wrinkle in Time review by CP Customer

Lots of flashy visuals but ultimately disappointing, the plot of the film is so thin you can see through it. It also suffers from very one dimensional characters.

Jobs for the girls. - A Wrinkle in Time review by NC

Really quite boring. Watched it all through, but not really involved enough in all the silliness to worry what happens to the main characters.

A Wrinkle in Time review by Mark McPherson - Cinema Paradiso

A Wrinkle in Time is the type of fantasy that tries to lift you off your feet with surrealism and leave you scrambling to reach back for the ground. Don’t get me wrong; I’d love for kids have more trippy fantasy films along the lines of The Dark Crystal or Labyrinth. But Ava DuVernay’s big-budget Disney adaptation is devoid of subtlety in its themes and lacking in any consistent or understandable plot that it becomes more of demeaning to the intelligence of children rather than becoming the well-meaning inspiration it set out to be.

Meg (Storm Reid) is your typical down-in-the-dump preteen in need of an adventure for her thought situation. Her scientist father (Chris Pine) has gone missing for years. The teachers gossip that maybe he ran off with another woman, but that’s not true. Not in this wild adventure. It turns out he’s at the other edge of the universe after unwittingly discovered a fold in space and time. This information is delivered by three intergalactic travelers that rattle off the exposition fast enough to keep this film under two hours. There’s Mrs. Whatsit (Reese Witherspoon), a decadent gown-wearing pixie that seems as ditzy and magical as a plucked princess of Disney fairytales. There’s Mrs. Who (Mindy Kaling), a woman who speaks only in Earth references, a bit that runs out of steam fast. And then there’s Mrs. Which (Oprah Winfrey), appearing as the calm and collected figure that is seen mostly as a giant for little reason other than the film being able to boast a big Oprah. And if you think this script won’t make the obvious jokes with these names the moment they enter the story, you’re wrong.

Through these travelers, Meg, along with her brother Charles (Deric McCabe) and her crush Calvin (Levi Miller), must travel to the edge of the universe and save her dad. I think. The story seems to stop and start at various points to either reiterate the theme of believing in yourself or showcase the amazing worlds. But are they that amazing? Meg and company seem to completely forget about their rescue operation to fly around a gorgeous green valley of another planet for no apparent reason. There’s no MacGuffin to require, no character to seek; just random flying scene made to manufacture wonder and danger. Later, they will visit an oracle called The Happy Medium (Zach Galifianakis), but he doesn’t even serve the purpose of providing a humorous aside in his world of rocks. Have you noticed how these names seem rather bland? Just wait until you see the forces of evil in the universe, referred to as the Darkness and led by the sinister It. How spooky.

A Wrinkle in Time not only lacks a narrative flow, but a solid means of forcing through its themes. A good film can weave the thematic elements of self-empowerment creatively, but DuVernay seems to put as much work into that as a court-ordered community service. At several points in the film Meg must told that she has the power within her to be a warrior, as though she has amnesia and may forget it. I almost wonder if DuVernay thinks so little of her child audience to receive the message that her direction violently shakes them into gaining some self-esteem. She even goes nuts with building up the confidence in nerdy girls by having Oprah compare Meg to the likes of Oskar Schindler and Nelson Mandela. All because she traveled to the edge of the universe and battled a monster by stating she loves her brother. I never knew she even hated him all that much considering how last-minute that whole arc appears.

I would like to take a film as this more likely considering its positive message and stylish visuals. But when the themes are so aggressively blunt and the plot a random cobbling of elements, it’s hard to stick with a fantasy that doesn’t bother sticking with consistency. For kids, I’m sure they won’t care about the bluntness and may even by wowed by the effects alone. But for adults, this movie is like eating a gluten-free, sugar-free, low-fat health bar. You know it’s supposed to be good for you, but it still tastes foul.