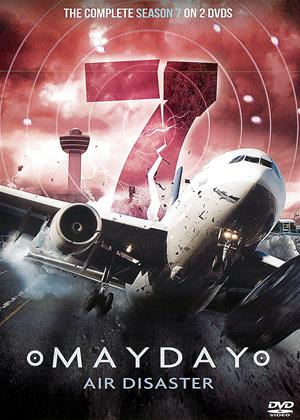 Synopsis:
Climb into the cockpit for an experience you won't soon forget. Using news footage, interviews and gripping reenactments, Mayday 7 investigates aviation disasters to find out what went wrong and why.

1. Scratching the Surface: China Airlines (747-200)
May 25, 2002 - Twenty minutes after taking off from Taipei, a China Airlines 747 suddenly disappears from radar. A massive rescue mission is launched - but all 225 passengers and crew are dead. After ruling out both a bomb and a gas tank explosion, investigators are stumped. They examine hundreds of pieces of wreckage, until they uncover a single piece of the hull, which solves the riddle.
2. Lockerbie Disaster: Pam Am (Boeing 747)
December 21, 1988 - Shortly after taking off from Heathrow Airport, Pan Am Flight 103 suddenly explodes in the skies above Lockerbie, Scotland. As the wreckage rains down on the small town and countryside below, fires break out, and homes are vaporized. All 259 people on board are killed. Who brought down Flight 103?
3. Blown Apart: Partnair (twin prop Convair 340-580)
September 8, 1989 - On a charter trip from Oslo to Hamburg, Partnair Flight 94 is cruising at 22,000 feet when it suddenly begins diving toward the sea. The aging propeller plane crashes into the water. All 55 people on board are killed. It is the biggest airline disaster in Norwegian history.
4. Sight Unseen: Saudi Airways (Boeing 747) and Kazakhstan Airlines (IL-76)
November 12, 1996 - Shortly after take off from New Delhi, Saudi Airways Flight 763 levels off at 14,000 feet. As the crew waits for clearance to climb to their cruising altitude, the plane is hit by a Kazakhstan Airlines jet. The collision cripples both planes. They spiral violently to the ground, killing all 349 people on board. It's the worst mid-air collision in the history of aviation.
5. Operation Babylift: US Air Force (C5A Galaxy)
April 4, 1975 - In the final days of the Vietnam War, President Gerald Ford orders an urgent mission called 'Operation Babylift'. Its goal: to rescue Vietnamese orphans and take them back to the safety of the US. Nearly 250 Vietnamese babies and children are loaded aboard. But after a steep and rapid ascent to get out of missile range, the aircraft's cargo door is violently blown off and the plane crashes to the ground. What caused the tragic accident? And can investigators find out before they have to flee the country?
6. Falling Fast: Tuninter (Turbo prop ATR-72)
August 6, 2005 - On route to the Tunisian resort island of Djerba. Tuninter Flight 1153 is high above the Mediterranean when, suddenly, its right engine fails. As the pilots begin an emergency descent, their second engine also stops working, the plane begins falling towards the sea. Despite numerous attempts, the crew can't restart their engines. They make a desperate choice - to attempt a landing at sea. Twenty people survive but fourteen of the 34 passengers are killed.
7. Flight 574: Lost: Adam Air (Boeing 737)
January 1, 2007 - After taking off from Indonesia's Suribaya airport, Flight 574 settles in for the two-hour trip to Manado. But somewhere over the Java Sea, the plane hits turbulence, and air traffic controllers notice the aircraft is hundreds of miles off course... and headed for a major storm. The jet's navigational systems aren't working. Suddenly, flight 574 disappears from radar - 102 people are killed. The investigation uncovers shocking problems with Adam Air and much of the Indonesian airline industry.
8. Frozen in Flight: American Eagle (Aerospatiale ATR-72)
October 31, 1994 - It's a frigid Halloween night in the skies above Chicago. Bad weather is delaying dozens of flights, including American Eagle 41-84. Suddenly the plane spins wildly out of control. The pilots fight desperately to right their plane but can't. It smashes into a cornfield and all 68 people are killed instantly.
Actors:
Henry Chan, Ho Chow, Richard Tse, Gary Biggar, Jason Weinberg, Kylanna Lee, Warren Chow, Marjorie Chan, Norman Chan, Clint Crookshanks, John Delisi, Huang Jiunn-Juei, Kay Yong, Frank Zakar, Thomas Mitchell, Richard Nash, Clyde Whitham, Jerome Bourgault, Steve Adams, Lukas Penar
Directors:
Ian Robertson, George D'Amato, James Hyslop, Tim Wolochatiuk, Karl Jason
Producers:
Katherine Buck, Alex Bystram, John Vandervelde
Voiced By:
Stephen Bogaert, Michael Buerk, Jonathan Aris
Narrated By:
Stephen Bogaert, Jonathan Aris
Creators:
Bernard Vaillot, Andre Barro, Greg Gransden
Writers:
Bernard Vaillot, Andre Barro, Greg Gransden, Alex Bystram, Larry Bambrick, Christopher Blow, Jeff Sturge
Studio:
Danann Publishing
Genres:
TV Crimes, TV Documentaries, TV Dramas
Countries:
Canada