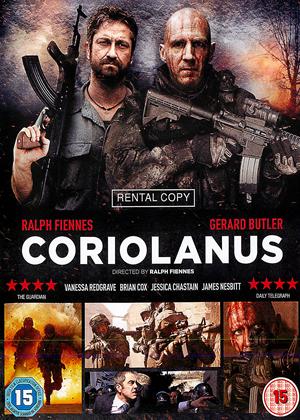 Not my type of film - Coriolanus review by LP

are you talking english - Coriolanus review by KA

Ralph Finnes stars and directs in this modern envisioning of William Shakespeare’s Coriolanus, the story of a battle worn solider who is raised to the position of Partisan after his successful defeat of Rome’s neighbouring enemies the Volscian’s. Yet the autocratic Coriolanus quickly shows his distain for his people, turning them against him and banishing him from the city.

It is here where Coriolanus turns on his remnants of pride and loyalty and joins with the Volscian’s in order to bring war against the Romans. Occasionally and inaccurately Coriolanus is cited as a historical play, yet there is doubt to whether Gaius Marcius Coriolanus really existed, as such Coriolanus is labeled as a tragedy; supposed idly, according to T.S Elliot, Shakespeare’s greatest tragedy, greater even than Hamlet.

I certainly would not go far as to say that, personally I found Coriolanus a rather unpleasant and unlikeable character, but it was still an interesting interpretation of the largely under-performed play.

Fiennes sets his movie in the civil war of Eastern Europe, entangling the story of Rome with that of Yugoslavia and Serbia. Visually this makes for a very interesting piece, with a painful and almost too real edge to it.

As a political allegory however it somewhat flounders, perhaps it was that the movie lacked the strength of direction that was needed, but beyond the visual change the attempts to associate Coriolanus with the tumultuous violence of the 1990’s seems to degrade both sources; muting the impact of both the symbolism and the emotion,

This is not to say that the film was not expertly performed, Gerard Butler was a particularly good casting choice, whilst Fiennes was brilliant as you would expect him to be and it made for a highly impressive and enjoyable few hours, but I couldn’t help but feel it lacked the emotion truly required for the piece.