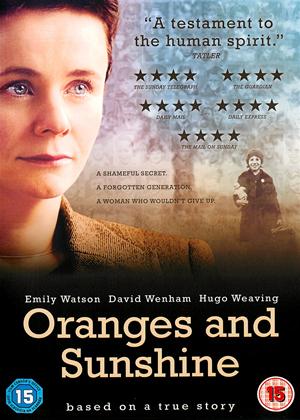 Reviews (2) of Oranges and Sunshine

Too sentimental but worth watching - Oranges and Sunshine review by PV

This is a watchable movie, but suffers from a terrible sentimental streak, no doubt to appeal to the US market. There are plenty of stereotypes here too: the tough woman struggling to juggle work and family; the way her husband and kids comes round in the end; the loutish boorish character who turns nice by the end of the film; the way this supewrwoman overcomes nagativity and hostility to succeed in the end: this is a template for so many Hollywood movies and their imitators. But at times, this film feels like a feminist lecture....................

BUT - there are some great scenes in this story and good acting, and it's worth watching for the scene with the despicable catholic brothers alone. The catholic church is still covering up massive child abuse and refuses to give evidence to the courts about what they knew and how they just moved abusers from parish to parish. But this movie is a bit coy and puritan - we get no real details of this disgusting abuse, just occasional looks and silences - I would have preferred detailed and graphic descriptions, so as to show in no uncertain terms just what those awful catholic brother abusers did....................................

Of course, there is an argument to be made that sending children away to Australia was actually better than leaving them in slums with unfit mothers in the UK, but that argument is only represented here by some cardboard cut-out bureaucrat baddies. (These days, social workers are obsessed with keeping kids with their mothers, even if they are totally unfit and then give their children up for adoption, damaged and disturbed, when they are four or five years old).

This film is worth watching, so 4 stars. But it's not as good as the TV movie 'The Leaving of Liverpool'.

Powerful telling of a true story. - Oranges and Sunshine review by Steve

Explosive, angry expose about very young children taken from care homes in the UK and sent to families or religious orders in Australia. Loach's moral indignation is incredibly powerful and the horror of the cases pretty hard to bear. Emily Watson is extraordinary as the social worker trying to bring peace to the damaged children.

Oranges and Sunshine tells the true story of social worker Margaret Humphreys who in 1987 discovered a government run scheme that relocated poor British children to other countries in the Commonwealth of Nations; often without their parent’s knowledge.

Humphreys is played by Emily Watson, who puts in a stunning and touching performance of a woman both determined and disturbed by the truth she is uncovering. Humphreys travels to Australia in an attempt to reunite children with their families, some of whom were told their parents were dead, whilst others simply did not know they existed at all. Watson’s performance is simply one of many honest and moving performances of the film, particularly her husband, played by TV regular Richard Dillane, which fuel this dreadful, tragic and beautiful drama.

Directed by the son of veteran British realist director Ken Loach, Jim Loach, the film has the same painful aspect that many of his father’s films do. However Oranges and Sunshine is not quite the hard watch most expect from the elder Loach. The film burns ever so slowly, which helps keep the tension at a respectable height without being relentless. Throughout the film exudes a gentle and understated tragedy without letting the suspense and horror of the situation droop. Much of this is helped by the excellent performances of Watson and her co-stars, including brilliant but very different performances of David Wenham and Hugo Weaving.

As you would expect from a Loach the depiction of bearcats is not a kind one, where those on both sides, Australia and the UK alike, are shown to be short sighted and ultimately monetary single minded. Whilst the religious Christian organisation involved in institutional relocation of the children are barbaric and utterly inhuman; where instances of brutality and mental and sexual abuse are treated with the horror and distain they deserve.

In many ways the film is very dark and unpleasant, yet thanks to Watson, the heart and soul of the movie, the film is almost uplifting. Albeit painful, emotional and dramatic, Oranges and Sunshine is an undeniable Anglo-Australian success.