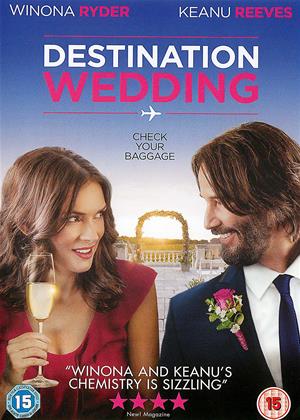 Synopsis:
Frank (Keanu Reeves) and Lindsay (Winona Ryder) meet on the way to a romantic wedding in California's wine country, and take an instant dislike to one another. After agreeing to ignore each other, they are dismayed to learn they have been paired off for the weekend. Forced to tolerate each other, Lindsay and Frank discover that in addition to their need to always get in the last word, they share the same cynical sense of humour. A brush with danger brings them unexpectedly close, but it remains to be seen if they can - or even want to - continue their romance in the real world.
Actors:
Winona Ryder, Keanu Reeves, Dj Dallenbach, Ted Dubost, D. Rosh Wright, Greg Lucey, Donna Lynn Jones, Curt Dubost, Michael Mogull, Scott Andrews, James Gallardo, Sean Sullivan
Directors:
Victor Levin
Producers:
Elizabeth Dell, Robert Jones, Gail Lyon
Writers:
Victor Levin
Studio:
Vertigo
Genres:
Comedy, Drama, Romance

Lots of lines to remember! - Destination Wedding review by NC

Is OK. Is different. Basically the two people talk through the whole film. Reeves is a robot, as normal. Odd banter is clever.....bit Homer Simpson with a GCSE...............

Over the course of the event they get to know each other and we - the audience - get to know them.

Thrust together through circumstance and sharing similarly cynical views on Life, Love and the Universe, both people discover that perhaps being "The People who you don't know where to put" isn't the worst thing in the world.

Keanu Reeves and Winona Ryder have excellent comic timing, and great chemistry in this Anti Rom-Com.

We gave this an hour. There is no-one else in this movie apart from Keanu and Winona, they do not inspire and you are desperate for someone else for them to talk to.

We decided we'd wasted enough of our life on this miserable offering. Avoid.

Destination Wedding can suitably be referred to as the romantic reuniting of Keanu Reeves and Winona Ryder coupling movie. It’s a film that about much else. No subplots about the wedding they’re both attending, no romantic pathos they feel they need to conquer, and no desperation talk of cliches as the two waltz through the will-they-won’t-they love story. They perform this dance but in such a way that never seems to relish their company with absurdities, where every stroll, kiss, and encounter in bed comes with a side helping of casual cynicism and dialogue worthy of a Woody Allen film.

Ryder and Reeves play Lindsay and Frank, on their way for a family wedding in Paso Robles, California. They’re considered to be the more distant members of the families, choosing to sit back in a corner and stew with their thoughts rather than talk to anyone. They have jobs they don’t particularly dig all that much, Lindsay being a politically correct lawyer and Frank a touter of automobiles. They don’t particularly get along but they share a similar level of disdain for the world that they’re clearly a perfect match. So, of course, they’ll be saddled together on the plane ride over and be housed next to each other in the hotel.

The film isn’t so much about the wedding as it is a neverending series of conversations between the two where they quickly grow to favor their sour attitudes. They’re very cute in this regard, how they find a way to bicker over what breed of a mountain lion is staring them down, both fearful of their lives and perplexed by what breed of animal it may be. I could see how this type of writing may get on some people’s nerves, but I just couldn’t get enough of their squabbling, the way they can make small-talk in any situation, including while currently engaged in sexual acts, flowing easily from chatting about children to whether or not there are crabs near them.

Ryder and Reeves make an adorable couple and the film never strays from their path, keeping the wedding and everything around it at a distance, to where even the characters will break off and find something better today. For this reason, this may very well be the perfect romantic comedy for the person that hates romantic comedies. These two come with a distinct jade exterior where their idea of a fun time isn’t attending a wedding but shouting back at medical dramas on television about how much the doctors seem to care more about their relationships than their parents. I’d think any cynic willing to find someone that could share the experience over a glass of wine would have found their true soulmate, though I doubt they’d use that corny word.

Destination Wedding heads for anything but the obvious in its many conversations of everything from messed up families to airplane peanuts to the very art of making conversation. There are no real stand-out scenes or quotable lines of dialogue, but it’s still a pleasing enough experience to watch to great actors chit-chat a while and maybe make some love somewhere in between. A casual outing of Ryder and Reeves where I didn’t feel too awkward being the third wheel.