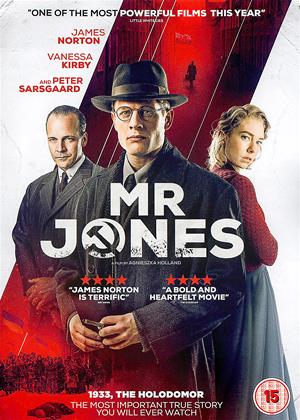 Synopsis:
Academy Award nominee Agnieszka Holland brings to the screen the extraordinary and powerful story of the real-life Welsh journalist who uncovered Stalin's genocidal famine in Ukraine, which killed almost 10 million during The Holodomor of 1932 and 1933. Gareth Jones (James Norton) is an ambitious Welsh journalist, who gained fame after his report on being the first foreign journalist to fly with Hitler. On leaving a government role, Jones decides to travel to Moscow in an attempt to get an interview with Stalin himself. Hearing murmurs of government-induced famine, Jones travels clandestinely to Ukraine, where he witnesses the atrocities of man-made starvation.
Deported back to London, Jones publishes an article revealing the horrors he witnessed, but is accused of being a liar by those who have an interest in silencing him. As the death count mounts, Jones has to fight for the truth.
Actors:
James Norton, Vanessa Kirby, Peter Sarsgaard, Joseph Mawle, Kenneth Cranham, Celyn Jones, Krzysztof Pieczynski, Fenella Woolgar, Martin Bishop, John Edmondson, Michalina Olszanska, Martin Hugh Henley, Olena Leonenko, Edward Wolstenholme, Marcin Czarnik, Barry Mulkerns, Piotr Szostak, Alexander Bozhko, Oleh Kyryliv, Roman Skorovskiy
Directors:
Agnieszka Holland
Producers:
Andrea Chalupa, Stanislaw Dziedzic, Klaudia Smieja
Writers:
Andrea Chalupa
Aka:
Man Made
Studio:
Signature Entertainment
Genres:
Drama, Thrillers

As the blurb states, in this piece Agnieszka Holland tells the important story of Welsh journalist Gareth Jones who uncovered Stalin's genocidal famine in Ukraine in the early 30s. And it is the extended section of Jones' journey to Ukraine which is easily the strongest part of the film, with the post-apocalyptic nightmare depicted with minimal dialogue and including some powerful, soul-stirring touches shown without sentiment.

Unfortunately, much of the rest of the film is rather plodding and pretty obvious, and there are some pretty awkward touches such as an ill-judged attempt to shoe-horn George Orwell into proceedings; even during the Ukraine section there's rather one too many unnecessary melodramatic elements which of course only serve to undermine the full of horror of what is taking place. The film as a whole also plays fast and loose with the historical record, and whilst I've no problem in principle with this, it is a bit odd given the wonderful source material at hand - there's so many details in Jones' real-life diaries and newspaper reports which you would have thought would have worked well on screen. So all in all a well-intentioned piece but something of a missed opportunity, I fear.

Based on a true story we follow a journalist into Ukraine uncovering Stalin's ruthless disregard for human life as people starve to feed Moscow. Not a revelation in itself but the movie paints a picture of suffering and how the lid was lifted on the propaganda the Soviet Union put out about how wonderful life was under a communist dictatorship.

Not a thriller but a serious study of courage and dedication. A fitting tribute to the type of journalism we all need even now; behind enemy lines and face to face with war zone dangers. I finished the movie with a deep regard for the profession and the dignity of Gareth Jones and his mighty pen.

Was really enjoying the film but gave up as the sound was poor and had no subtitles, such a shame for a modern film.

A powerful film about a man with integrity refusing to be told what to say - Mr. Jones review by PJ

In 1933, Gareth Jones is a young journalist from Wales who is known for having interviewed Adolf Hitler. He manages to get official permission to travel to the Soviet Union. Jones is restricted to Moscow but succeeds in travelling unofficially to the Ukraine: he has become convinced there is a government cover-up and conditions are very difficult there. Nothing, however, has prepared him for what he discovers, i.e. the extent and horror of the Holodomor, the Great Famine that has hit the Ukraine, including empty villages and starving people.

[See Wikipedia on the Ukrainian famine, which would have killed between 3.5 and 12 million people (according to a UN estimate, 7 to 10 million): https://en.wikipedia.org/wiki/Holodomor]

G Jones was a truly remarkable character, a bit idealistic, no doubt, devoted to the quest for the truth as part of his job as a journalist with principles. James Norton is very convincing as G Jones, and generally the acting is very good; the film succeeds in re-creating the atmosphere of 1930s Russia and Ukraine very well. You feel you are there, sharing in G Jones' nightmarish experience. What is also interesting is the reaction, back in the UK or in the USA, to G Jones' revelations regarding the Ukrainian famine.

This is a powerful film talking about one of the darkest aspects of J Stalin's rule. Some reviews, when the film came out, were very mixed and highly critical, implying that the film is conventional or dull. I disagree. It is moving and profound in more ways than one. I would certainly recommend it, all the more so if you are interested in the history of the 20th century, but not only.

The Ukrainian famine is not talked about so much outside the country. And G Jones would deserve to be better known: his tragically short life was, in fact, centred on his fight against what we now call 'fake news', which is not a new phenomenon at all.

This is an interesting film looking at one of the great crimes of the 20th century and as we all know, there was plenty to choose from. The main lead, unwittingly stumbles (literally) over the 1930's famine, engineered in the Ukraine by Stalin's despotic policies. More of a political thriller than horror, the movie is about the then current politics between the USSR and the unsuspecting British. The film later hints that 'unsuspecting' isn't quite true and darker forces are afoot, all way above our heroes' head. The movie thankfully skimps on the full horror of what Stalin did, which is just as well. For those interested, the internet is a good source of official documentation but a warning, a strong stomach is definitely needed when seeing the gruesome photos.

An intelligent film about an appalling act which the Soviets tried not so much to brush under the carpet, but bury at the bottom of the ocean.

I was impressed by this film. 1930s Russia is an interesting backdrop and the acting is generally excellent. The part of the film in the Ukraine is quite shocking and memorable. The script-writer does a good job in linking up to real life events and the end is well done. There are also some interesting asides to George Orwell and Animal Farm. I'd certainly recommend to others.

A heartfelt and well intentioned historical drama based on a true story. Set in the early 1930s it tells the story of a humble Foreign Office advisor, Gareth Jones (James Norton) who travels to Moscow to interview Stalin about the USSR's claims of an economic boom. Once there he slips his soviet 'minders' and travels south where he witnesses the state induced famine which is killing millions. The Soviets do their utmost to discredit him and what he eventually reports. This is a story of heroism and has elements of espionage and taut thriller to it. Norton gives a strong performance as the committed welshman who refuses to kowtow to pressure to change his story. The film begins a bit slowly but once Jones is ensconced in Russia the film takes on a survival narrative, with some haunting and quite shocking scenes, and then it picks up even further once he's back in England and attempting to get the Government to believe him. Vanessa Kirby co-stars and there's support too from Peter Sarsgaad, Joseph Mawle (as George Orwell) and Kenneth Cranham as Lloyd George. An entertaining and very interesting film telling the tale of an unsung hero, indeed he's something of a welsh legend. A film that is well worth an evening's watch.

As with previous reviewer, I would have loved to have watched this film but I am one of substantial minority of people with hearing loss who are dependent on subtitles.

This is 2020 surely the production company can produce the DVD in Blue-ray wide screen with a choice of sound systems but no subtitles. Shame on you and no sympathy if you lose money and get poor reviews.

Very disappointed to find that there were no subtitles for this. Yes, I should have checked the ‘Available formats’ information  before selecting but is it really too much to ask, with the technology available today, for new films all to be provided with subtitles? My rating for the film is not based on its content  but on its lack of accessibility.