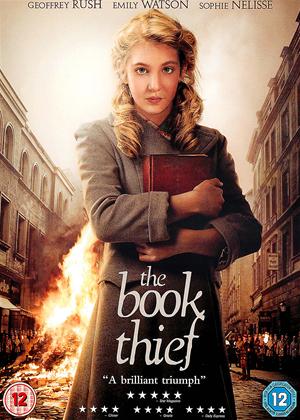 Reviews (8) of The Book Thief

This is one of the most moving films about the Second World War that I have ever seen.

I wasn't sure at first if it was a children's film (it isn't) but it didn't matter - the plot and characters soon had me gripped (thou at first I was unsure about the 'Death' narration - by Roger Allam AKA Thursday from ITV;s Endeavour - but yes, that works too).

Some genuine surprises in the plot which no Hollywood movie would ever choose make this even better.

Excellent acting, script, atmosphere. And how great to watch a movie about books too - and some beautiful language and stories.

I haven't read the 2007 book, so no idea how this compares. But this film really is lovely and deeply moving too - and it's unusual too see a film considering World War II from the German side.

What a lovely film! On every level it enthralls. Wonderful acting throughout with a story of real depth and humanity.

My wife and I watched it twice in the same day.

Great film - a real insight into the difficulties of living in Nazi Germany, but I would definitely describe it as a film for older children, rather than adults.

We hired this film because it was compared to 'Hannah Arendt' (a different sort of film entirely), & has a couple of excellent actors. From the opening music, I smelled schmaltz, & there's plenty of that here. On the positive side, it's visually outstanding in its recreation of a small German town during the Nazi years (what are those two smoking chimneys?), interiors, & clothing, & the portrayal of captured Jews, book-burning, & Germans taking refuge in the air-raid shelter is chilling, but the horribly chummy Omniscient Narrator, & frightful cod-German accents undermine all its virtues.

Every bit as good as the book - and that's saying something! - The Book Thief review by TD

The book is one of my favourites of all time, and I was prepared to be disappointed by this film. I wasn't. It was incredibly moving and I wept uncontrollably near the end - but then I'm a soft touch ;-)

THE BOOK THIEF - The Book Thief review by SM

This is an excellent film shot from a different point of view from a lot of war films & as an ex-librarian I am fascinated how books capture some people in their live.

I was not disappointed, this is in my view an excellent and sensitive film. Very moving. It is well acted, and kept me watching. Was sorry when it ended!

Don't be put off by the cover - there are no dumb blondes in this film! A moving story, movingly portrayed. A first-class adaptation of the book which (necessarily) left out one or two episodes. Why didn't I give it five stars? Only a film which is mind-blowingly brilliant gets that. It's not that, but it's very, very good.

Having recently watched the impecable Hannah Arendt, it’s hard not to watch The Book Thief and see the world she saw, the people in it hiding their personal hatreds and fears through blind loyalty. However The Book Thief isn’t about that, it’s a tale of moving past fear hatred to the idea of living regardless of the world you have been forced to endure.

The film follows Liesel (Sophie Nelisse) as she is forced by her mother to live with a married couple far away from her home. While she is first aprehensive she finds herself in loving company in the form of new father Hans (Geoffrey Rush) and mother Rosa (Emily Watson). They foster Liesel’s love of books and the written word and encourage her to push herself. However when war reaches Germany her new life and family is tested in many different ways.

Having never read the book the film has been based on I cannot speak for its many fans but I can say that it’s a wonderful film not only through its excellent performances (Rush and Nelisse specifically) but through the way it sees the world. The film has a kind of hopeless optimism to it that sees Liesel and the audience through some horrible events and some trying times. Each character has something to live for, something to strive towards even with everything that is happening to their country and their home, they still want something out of life, a beautifully human desire.

While the film tells a story of people keeping secrets, its the hidden character traits that make it great, be it the soft heart of a previously cold survivalist to the unimaginable kindness of those thought to be Nazi’s. The film is a real advocate for the human spirit and its easy to see that in Liesel, a bubbly, warm and kind lead whose tale is both enviable and heartbreaking.