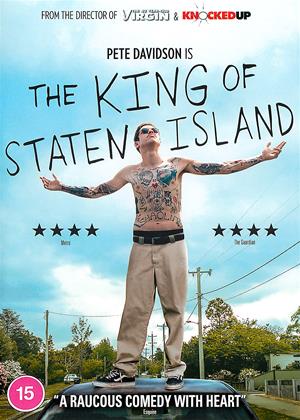 Rent other films like The King of Staten Island

Reviews of The King of Staten Island

Pete Davidson always felt like the odd man out of the Saturday Night Live crowd as he could never blend seamlessly into numerous roles. There was no missing Davidson and he wasn’t exactly known for his impressions. That being said, he felt like an actor who could work if handed the right role. In Judd Apatow’s The King of Staten Island, he has found a role that fits him to a tee. It’s a perfect fit for him that I was disappointed his lead acting debut is treated more like an extended fitting of his suit than really breaking it in.

Davidson plays Scott Carlin, a twenty-something of Staten Island with a life that is going nowhere. Having grown up without his father after he died working as a firefighter, Scott has slipped into a cozy cocoon of aimless haze. He spends his days smoking pot with his friends and hopelessly trying to achieve his dream of becoming a tattoo artist. His work varies in style and quality but it’s clear he won’t get too far with his grand goal of opening a cross between a tattoo parlor and a restaurant. Not exactly a winning combo even if it is original. Pete has ambition but its misplaced, using his dopey friends as sketchbook practice for his tattoo.

It’s going to take a lot to like Scott and this made evident during a scene where he runs across a kid at the beach and stupidly decides to give the kid a free tattoo. Only one friend of Scott’s looks on in horror, ending the scene with “I regret my friendship with you guys.” Yet this is treated more like a punchline as this character will remain friends with these misfits, even letting himself get talked into a robbery go wrong. While it may be too late for Scott’s friends, Scott may have a shot at life past prison when he inadvertently sets his single mother up with the firefighter Ray Bishop, played by a mustached Bill Burr. All Scott knows about Ray at first is that he’s a bit of a hot-head. Once Scott learns of Ray’s profession, he’s exceptionally uncomfortable and angered by this development.

Slowly, Scott learns to place trust in Ray and come to better terms with his late father. The film moseys along towards Scott helping out the firefighters through a series of small jobs and odd occurrences. Scott also learns to let go of his mother, trust his sister off at college, and show some affection towards Ray’s children. It’s a dramatic journey of hills and valleys that feel all too real and relatable as most Apatow comedies of understated smirks amid harsh drama tends to be.

Yet the biggest problem with the film in its running time of over two hours is that it presents a series of unique scenes that unfortunately never fully take off. I liked the scene where Scott goes on a baseball outing with Ray and his firefighter friends only to explode on them in his discomfort of firefighters making promises to their kids they know they can’t fully keep. That’s a great scene but we don’t really build much on it, quickly switching gears to another tougher spot of Scott’s life. There are so many plates balanced at once that the story seems more concerned with making sure none of them fall to the floor than making them entertaining. Scenes after scene continues to be good but never great, often introducing elements out of nowhere for the benefit of finding something to do. For instance, Scott’s major moment of connecting with Ray occurs when they collectively help a random bleeding stranger into the emergency room. It’s a believable scene but one that feels so encapsulated one could’ve started the movie so late here and still get the emotional connection.

The King of Staten Island has some nice dramedy touches but never really takes off with much of it. What seems present is a series of vignettes that are certainly palpable but hardly play off each other, looking more akin to a TV series mashed together in a feature the dices up the episodes into a movie. Davidson certainly has a future as an actor in the role of a concerned slacker with stoner tendencies. Now he just needs to find a director who will give him a story that spends less time meandering.