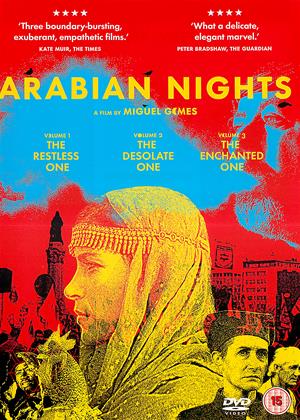 Rent other films like Arabian Nights: Vol.1: The Restless One

Reviews (2) of Arabian Nights: Vol.1: The Restless One

Possibly good if you can make sense of it - Arabian Nights: Vol.1: The Restless One review by RD

Apart from a short snooze about 20 minutes into the film, I managed to watch it for an hour before giving up completely.

It starts with a documentary piece about the winding down of a shipyard, interspersed with a story about killing wasps nests. Then it goes into the separate pieces of Arabian Nights style stories.

The first part is incredibly tedious, with nothing of interest, no characters and nothing happens. It's merely a commentary on the injustices of the capitalist system that winds down a shipyard.

The other pieces have a lot more going for them with some very weird stories that unfortunately were way beyond the comprehension of this poor sad mortal. Imagine making a film that's so complex and odd that it will not make sense to the viewer. I could of course pretend to understand it and then it will become a masterpiece of cinema art. But the sad thing is that whatever is not understood is actually perceived as rubbish, so I am happy to admit defeat with this film and confess I haven't the intellect to understand it.

Feeling bright and alert as a film critic on clever pills? Then watch it, but have something else ready just in case the pills don't work.

Gave up after first half hour - Arabian Nights: Vol.1: The Restless One review by LC

Have to agree with the other reviewer here. The first part about the plight of Portuguese dockworkers and wasp killers was too dull to make it worth continuing. The style of filming and narrative was unfocused and not engaging. Not recommended.