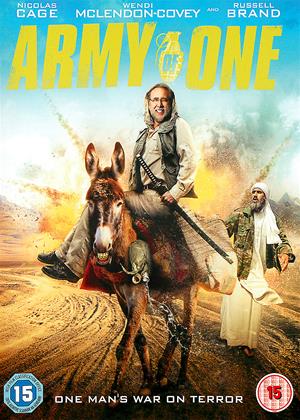 Synopsis:
"Army of One" is the (mostly) true story of Gary Faulkner (Nicolas Cage), an ex-con, unemployed handyman, and modern day Don Quixote who sets out on the unlikeliest of missions. Armed only with a Samurai sword, purchased from a home-shopping network, and the belief that he is following the express command of God (Russell Brand), he travels to Pakistan in order to capture Osama Bin Laden and bring him to justice.
Gary's is joined on his journey by old friends back home in Colorado, new friends he makes in Pakistan, and some new enemies he makes at the CIA, as well as God and Osama themselves - who all can't help but be inspired and forever changed by coming in contact with such a force of nature as Gary.
Actors:
Nicolas Cage, Wendi McLendon-Covey, Matthew Modine, Rainn Wilson, Denis O'Hare, Fiona Vroom, Russell Brand, Hilary Jardine, Will Sasso, Paul Scheer, Adrian Martinez, Mark Brandon, Toby Hargrave, Amer Chadha-Patel, Lauren McGibbon, Daniel Jones, Graeme Duffy, Chenoa Morison, Charles Edward Bae, Arien Boey
Directors:
Larry Charles
Producers:
Emile Gladstone, Jeremy Steckler, James D. Stern
Narrated By:
Michael Yurchak
Writers:
Rajiv Joseph, Scott Rothman
Studio:
Arrow Films
Genres:
Action & Adventure, Comedy

Reviews of Army of One

Army of One review by Adrijan Arsovski - Cinema Paradiso

Army of One is a true romp of a film, in the whole sense of that exact word. Meaning, Army of One is funny, quirky, explosive, energetic, and a little bit on the weird side, which is not bad at all. In fact, in this film we see the whole acting range of near-forgotten Hollywood star and eccentric Nicholas Cage in all its glory, showcasing how an immense talent can produce something extraordinary out of the most absurd material you’ve seen in a while. With that being said, Army of One features some of Cage’s best performance put on screen till date.

The film is based on a true story and follows your typical American nutcase in a quest to find the most wanted terrorist to date and bring him to justice – singlehandedly. That man is none other than Gary Faulkner who, amidst all of that “war against terror” madness, went on to locate and retrieve (or eliminate) Osama Bin Laden in Pakistan, carrying a real-life Katana in his backpack and had zero eff’s to give. As absurd as it may sound, the whole story seems just plausible enough to get a treatment for the big screen. And Faulkner did all of this whilst guided (or so he thought) by the voice of God (played by Russel Brand) him/itself.

Entertainment-wise, Army of One features some of the wackiest scenes imaginable, and does it all with a real heart put to it. Some of Gary’s relationships in the film are, albeit idiosyncratic, but also very heartwarming and poignant as well. Take for instance his backs-and-forth with Marci (Wendi McLendon-Covey), which could’ve easily went over-the-top if not for the timely intervention by director Larry Charles (who he himself has a track record of some very questionable films, one being Bruno for instance). And thus, Garry’s fable of embarking on the most dangerous quest in the history of his life comes full circle, as we find him explaining the complex nature of his need for a katana to a confused and a flabbergasted airport lady, with no precedence to back up his demand whatsoever. For some reason, a combination of his erratic demeanor, unwitting charm, and snake oil salesmen techniques, Garry Faulkner manages to convince the world (and consequently the airport lady) that it is nothing more than a family heirloom that which he so desperately seeks to routinely smuggle on board. And to which he succeeds in doing so.

All in all, Army of One features an interesting protagonist that is also nuts, which is the quintessential Nic Cage when one comes to think of it. And thinking even deeper, this may well be Cage’s Oscar-worthy performance and his sincerest film role till date. If you have a chance, and don’t have anything better to do, definitely go and see Army of One in all its pseudo-patriotic/parody glory.