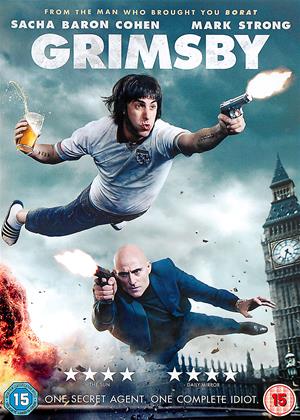 Plunges the depths - Grimsby review by AM

...but it does make you laugh if you can get over the grossness!

Not one to watch with the kids, and should be an 18 in my opinion, but I am out of touch with how the ratings work.

What is Mark doing with Ali G ? - Grimsby review by NC

The idea of Mark Strong and the Baron in the same film is, or was, a thing of theory only....but here they are. After a bottle of wine, it is even more surreal than can imagine!

As a reflection on Grimsby, it is pretty murky. Needless to say the Baron is the lowest possible denominator by a country mile.

Is so gruesome it does actually have a funny aspect. One needs to be a bit distorted to fully appreciate it perhaps, but at least it is different.......very different! Be warned.........

There is definitely a cringe value to over-privileged actors playing under-privileged characters mockingly, of being proud of Grimsby with a hint of irony and having a large family in the sense of "the Meaning of Life" of having a different set of moral standards. The tone of the comedy is set by these themes. The title of the film and the cover gave me no reason to be optimistic about the film. I did not like Sasha Coen's previous characters apart from Ali G except when he knocked some irritating politician off their pedestal. There are so many moments in this film which made me laugh, I won't spoil them but it is very slap-stick. If you watch You've been framed habitually you'll know the level of humour. Each poor taste moment of under-privileged derision, is balanced in other parts of the film by 2 chuckles.

Only found about two bits that were funny, the rest of the film was very crude or sick in a very bad way. Just a waste of some good actors. If the trailer was any thing like the film I would never had rented it

MI6 agent Mark Strong buddies up with his moronic brother Sacha Baron Cohen for action japes. From the DVD extras, it at least seems to have been fun to make. Shame none of that transfers to the screen. Wanna see naked fat people run? Wanna see Cohen suck poison out of Strong’s testicle? To cackling fans of gross-out images it’s pointless to say that this film has no redeeming cinematic merit, but less brain-dead viewers may well find it unfunny, formulaic, irritating and abysmal.

This is one for those who like gross-out movies - but it does hang together with a warped plot. And yes, I did enjoy it.

Sacha Baron-Cohen is convincing as a Grimsby lad and there are some genuinely funny lines - the whole underclass chav culture is rarely shown in films, but this one is fearless.

It's also the first film I have ever seen that was shot in Grimsby or even mentions it!

Not great but no turkey. 3 stars.

The thin edge of irony - Grimsby review by jw

I do love good irony, Jim Carrey is another. But Sacha Baron's alter egos hit a new low here. I have shook my head in unbelief, impressed and grossed at all his films. Is it because I'm English the Grimsby scenes were just so gross? Nah, they were. Mark Strong gave a convincing balance to the story. There were times we laughed so hard in disgust I could hardly breath. I rarely even smile through comedy. If you have an over active mind, I recommend give this film a go.

There was one big laugh I had out of Brothers Grimsby. It involves Daniel Radcliffe being infected with AIDS on accident by Sacha Baron Cohen’s character. Mark Strong remarks that Cohen was able to do in a few seconds what Voldemort couldn’t do in eight movies. It takes a long time to get to this joke, but it was worth the wait.

Brothers Grimsby could be seen as Sacha Baron Cohen’s big return to headlining comedy the way he attempts to embody a politically incorrect character, Nobby. While Nobby doesn’t quite feel as fully realized as his Ali G, Borat or Bruno personas, he certainly has his moments as a drunk of a football fan with too many kids and in dire need of a belt. He provides the stark contrast to his long lost brother Sebastian (Mark Strong), an MI6 agent that is highly skilled at his job. When Nobby finally tracks down his brother and accidentally ruins his mission, Sebastian finds himself on the run from his own agency while still trying to foil a terrorist plot.

Cohen and Strong play off each other decently enough as the dork and the straight man. They have a history between them, skeletons they need to clear out of their closets and a lot of catching up to do. Despite not having seen each other since childhood, the two still hit it off and make a decent duo. They’re genuinely likable considering how many mistakes Nobby makes that nearly get Sebastian killed and how much of Nobby’s crap that Sebastian puts up with.

Similar to Borat and Bruno, Cohen doesn’t shy away from some of the grossest gags he can throw himself at. Has his method of gross-out comedy aged poorly? Strangely, after all the disgusting comedies I’ve seen this decade, I was surprised by how all this foul material made me smile. That being said, the movie doesn’t know when to cut the joke. A scene where Nobby has to suck poison out of Sebastian testicles is amusing for 30 seconds. After 1 minute and 30 seconds, it begins to grow tiresome. The scene where Nobby and Sebastian have to hide out in an elephant vagina and then stimulate an elephant penis entering the opening is hysterical the first time - not so much the second time around. But I’ll confess that the AIDS joke is hilarious the second time around considering how much breathing room it’s given as a bookend gag.

As an action comedy, this picture isn’t half bad. The gunfights and car chases are competently shot and mix rather well with the comedy so the characters are not lost in the chaos. It always feels that Cohen and Strong both have enough to do as an unlikely duo, neither one just feeling as bodies present to dodge bullets. Their comedy could wear thin for these sequences, but it’s played up just enough before becoming aggravating. And I dug how this absurdity plays out to the very end which doesn’t skimp on the crudeness in the least when we get to the climax which is anything but expected.

Brothers Grimsby may not be the stand-out comedy of 2016, but it’s certainly a surprising bright spot in an era when comedy has become a little too safe or much too inhumane. It’s a tall order for a comedy to make you laugh about AIDS, welfare, poop and elephant ejaculate, but this picture will manage to make even the most jaded smirk or giggle. I didn’t expect to laugh at such simple jabs as Strong and Cohen being recognized as Vin Diesel and a member of Oasis, but damned if I didn’t find myself bursting out with a laugh here and there. Well played, Cohen. You made me smile at a movie where Mark Strong has to teabag you.