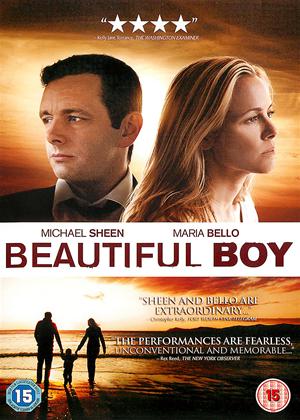 Delving into the truly troubling and horrific pretence of high school shootings like Columbine and Virginia Tech Beautiful Boy investigates how it feels to be the parent not of the victim but of the shooter.

A couple, Kate and Bill, both played brilliantly by Maria Bello and Michael Sheen find themselves lost and isolated after their son, Sammy, takes his own rage and isolation out on fellow pupils.

Beautiful Boy is not anything like a documentary, nor does it attempt to understand what may have happened to Sammy in his childhood to turn him into a killer, rather the movie is a heartbreaking investigation of a couple already on the brink of divorce struggling to come to terms with their own grief whilst simultaneously searching for answers.

The director, Shawn Ku, does not attempt to understand Sammy himself; in fact we see very little of the character other than snippets of his feelings of isolation and painful rage on videos made before his act. Rather Ku remains with the parents, who are as shocked and unsure as the audience about their son’s actions. It is the instability of the situation that pulls the movie along; when Bill – a man who usually bottles his emotions up – is faced with a situation he can not hide from, whilst his wife displays a raw and broken need that is unspeakably heartfelt.

These performances make Beautiful Boy a superb and haunting movie, about humanity and grief that is better than I have seen in a long time.