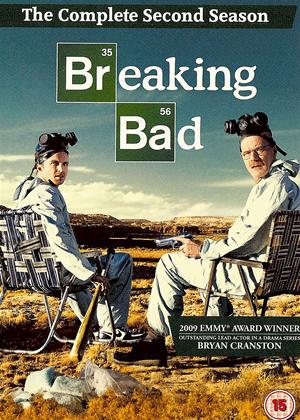 Continuing the (mis)adventures of mild mannered high school chemistry teacher Walter White. Season 2 of 'Breaking Bad' stars where Season 1 leaves off - you really do need to watch Season 1 first as they're definitely not standalone.

This is great TV: I waited as the set of discs arrived separately in the post, eager to watch the next episodes - but I guess this is the downside of a rental service :(

The medical costs of treating his lung cancer lead Walter into 'cooking' more crystal meth and into even greater dependence on his dropout addict drug-dealer partner. But this secret double life causes an ever-increasing web of lies that leads his wife to suspect that all is not well with Walt and inevitably leads to a breakdown in trust.

There are a number of threads to the storyline but the major effects of all these are:

- the need to sell drugs to pay for Walt's medical treatment

Walt is played by Bryan Cranston who is excellent in the role - his face is by turn expressive or deadpan as the situation demands. The other characters are well played and by now seem to have settled well into their roles within the storyline, which is tightly controlled even though episodes have different directors.

Despite the criminal activities that are committed and the semi-random violence that occurs, there are always items of black humour throughout. Perhaps the standout one is the head on the tortoise - you'll know it when you see it :)

[Aside: the cost of Walt's medical treatment given that he was not covered by medical insurance made me feel extremely grateful for the NHS]

I was late coming to Breaking Bad but I am SO glad I got out the DVDs.

I have to say that probably the first series is my favourite - I prefer the longer episodes and not 13 x 45 minute segments.

Having said that, this 2nd series is also good.

Not sure how long the series can keep this up without 'jumping the shark'.

But better than ANY drama on British TV especially the BBC who churns out lazy remakes and soapy drama to appeal to older women and therefore get ratings.