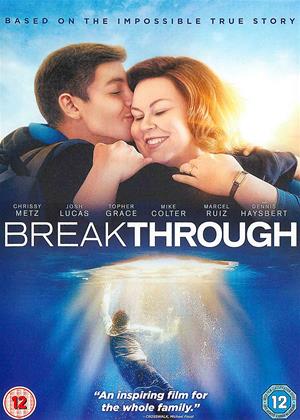 Breakthrough comes branded as yet another religious movie for moms. It is a film of tragedy and heartbreak where in the end the belief in God prevails and inspired all those who willing to let the lord into their heart. While this is certainly not the most obnoxious or even manipulative of the subgenre in Christian cinema, it’s a picture that still comes about as stock as advertised.

The film is based on true events documented in the Christian book The Impossible. Teenager John Smith (Marcel Ruiz) is having a hard time adjusting to being adopted in St Louis and struggles to connect with those around him. His rebelliousness soon finds him drowning in a frozen lake where he is saved but ends up in a coma. His adoptive parents of Brian (Lucas) and Joyce Smith (Metz) rush to his side and are heartbroken that their adoptive son is in a vegetative state. Could he pull through? Maybe prayer will help him pull through. Hell, it’s a Christian film; prayer must make him pull through. Wouldn’t want to anger the moms.

The film pulls out all the old and dusty bits of melodrama that have been trotted out time and time again for an endless onslaught of paint-by-numbers Lifetime movies. We’ll get the obligatory moment of Joyce cradling her unresponsive son asking for the good lord to deliver a miracle onto thee. Miraculously, John starts to pull through thanks to the words of his mother and a pastor who come together to declare his sudden recovery as divine intervention. Before you can even question why they would make such comforting shmaltz, we’re already onto scenes of crowds singing and praying for the likes of John.

Now let’s be clear here for any religious moms that go on the defensive; there’s nothing wrong with a film about faith and trying to find some reason to how uncomforting a world can appear. But Breakthrough never makes that journey feel all that introspective or personal past whimsical acknowledgment. When Joyce is feeling despair at the hospital, she retreats to the roof where she prays to God for an answer. She believes that the occurrence of snow is an answer to her prayers. Of course, there’s no mention of no snow in the forecast to make this appear more like a miracle. She just accepts this. When the moment arrives when the parents make a gamble in deciding to take John off the drugs for the possibility of a recovery, they do so under hope in their faith. In this instance, faith isn’t so much treated as acceptance of mortality and a spiritual insight but a mere rationalization for rolling the dice. Whatever gets you through the day, I suppose.

Compared to the more recent examples of Christsploitation, Breakthrough is almost underwhelming enough to nearly overlook its soapy take on Christianity via a true story to amp up the Bible-bumbling. It’ll be easy the mother of many memes on Facebook but thankfully won’t end with some tone-deaf declaration to hop on the web and spew out #JesusSavesYouFromComas or other such nonsense. It’ll be most notable for its Oscar nomination for Best Original Song, some decent performances, holding a spot on the Church DVD shelf and little more. A mildly-weak weeper for the unquestioningly religious seeking more affirmation than a challenge. One could do worse than this film but, wow, could one do far better.