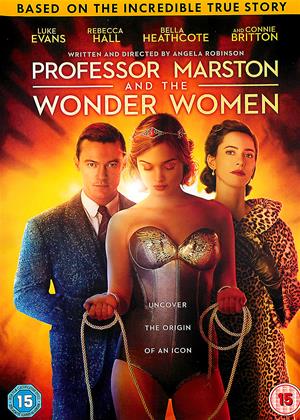 Rent other films like Professor Marston and the Wonder Women

Reviews (6) of Professor Marston and the Wonder Women

I enjoyed the movie , it gives you a whole new perspective on the comic book character and gives an insight into characters who , while having heir ups and downs were true to themselves. I have no insight to offer on its historical accuracy , I suspect it promotes entertainment over accuracy , it is a movie after all and most peoples lives run to a predictable pattern when viewed from the outside which would make for a pretty dull movie. As a piece of fun though , well worth watching.

A word of warning though , whoever was responsible for the movie transfer to DVD should be ashamed of themselves the bitrate is ludicrously low - and for no good reason that I can think of. There is plenty of space on a DVD after all. As a result the movie looks pretty poor, really along the lines of 8mm , which even your phone can improve on these days.

When films are based on true stories you kinda always wonder how much is artistic license. Even if you halved the true story portrayed in this film it would still be a remarkable tale.

It’s a slow burner to start but what unfolds is really, really fascinating. There are lots of side twists. The acting and directing are spot on. Quite adult content in places we see the evolution of the global phenomena of Wonder-woman develop from an amazing ménage a trois.

This movie feels long - very long. Its plodding and tiresome from the start and is in general just boring - which is quite an achievement when one considers it depicts sado-masochist sex!

This is one a spate of new feminist-issues movies to come out of Hollywood now, directed by women often, showing women as strong and men as weak - though of course Wonderwoman was created by a man, and the recent movie was written and directed by a man too!

My first issue was that I simply did not believe these characters were living in the 1920s and 30s - it was if they were #metoo activists transported through time and dressed up in 1920s costumes like puppets.

My 2nd issue is that Wonderwoman really is like a Poundland Superman. I was aware of the TV series in the late 70s but as a boy it held no interest for me - whereas I adored Dr Who, The 6 Million Dollar Man, and didn't mind The Hulk.

My 3rd issue is the way all these historical films set in the past portray people with morals and opinions of the 21st century as GOOD and all those with other opinions as BAD. It is silly and infantile, and not how life or history works! So women who believe in being housewives in stable 2 parent married households are mocked. WHY?

It's just so long and dull - and is basically an attempt to cash in on the Wonderwoman movie.

The BEST bit is at the end when over the credits we see real photos of the real-life characters portrayed - and neither of those real-life women were at all pretty, and the man was older too.

One to avoid except for Wonderwomen fanatics.

The story of a menage a trois. Marston came across in the film as not particularly intelligent, dogmatic and inflexible in his beliefs, and the actor who played him was too young and too good looking. Elizabeth, his wife, seemed more intelligent, but completely uncompromising, bad tempered and humourless, and it's hard to see why the saintly, mousey Olive, the third part of the manage, is so attracted to her. But what unites them is an obsession with kinky sex. They encounter hostility and prejudice from their work colleagues and neighbours because of their lifestyle, but it's hard to feel much sympathy for them, especially when they leave the door unlocked and a neighbour finds them in flagranto . The effect of their domestic arrangements is on their children is not explored, and the children seem absent a lot of the time so the parents can get on with their sex sessions unemcumbered. Wonder Woman is seen these days as a feminist icon, but she was a male erotic bondage fantasy . For a film that has sado-masochistic sex at its core, the sex scenes are very tame (no nudity) and unerotic.

This intelligent, engrossing and kinky biopic is about the psychology of emotions and the nature of male/female relationships. Marston is a Harvard psychology professor. With his even cleverer wife (a sparkling Rebecca Hall) he invents the lie detector. They both love their female assistant.

Inspired by the two women in his life, Marston creates Wonder Woman to show girls they can be anything they want to be, but this is defiantly not a superhero film. It’s much more than that. It’s a brilliant, unconventional film about brilliant, unconventional people. Unlike most anti-intellectual multiplex fodder, it’s chock full of interesting ideas as well as being grounded in three compelling characters. As the trio fall foul of social norms and Wonder Woman comics are publicly burnt, you’ll be rooting for them all the way.

The whole film is a clarion call for the freedom to live your life as you wish. In Marston’s words, ‘Who are you to judge us?’ One thing’s for sure, you’ll never look at Wonder Woman the same way again.

It’s sensitively directed by its writer Angela Robinson with a commitment and compassion perfectly attuned to its subject matter. The DVD extras explore the background and making of the film with similar heart.

Well knock me down with a feather! An intriguing drama about the sado-masochistic story of the invention of a cartoon character. I expect stuff is lurking around behind other comic creations too as the whole genre is camp and a bit odd. Performances are strong, scripting is engaging and how on earth did Wonder Woman ever get into print for kids featuring bondage and whipping/spanking etc?

I found the movie informative and entertaining; a great combination if you like to 'learn something' when you watch a movie. Certainly caught my attention and kept it.

Released the same year as the first movie adaptation of Wonder Woman, Professor Marston and the Wonder Women tells the true story behind the creation of the iconic female superhero. And it’s not exactly a PG-13 affair. It’s a tale of psychology, bondage, revolution, and sexual threesomes. From this fascination would come about one of DC Comics’ most prolific superheroes, saddled alongside Superman and Batman as one of the best. Strange, isn’t it?

William Moulton Marston (Luke Evans) and his wife Elizabeth (Rebecca Hall) are married and work as teachers of the 1920s at Harvard and Radcliffe. Their research includes developing lie detectors and determining DISC theory. When they’re not hitting the books, however, they’re very sexual. When they’re not being sexual or hitting the books, they’re scrutinizing social conventions in their snarky tones only professors could muster. This attitude turns out to have an odd effect on their volunteering research subject of the student Olive Byrne (Bella Heathcote). William and Elizabeth are shocked to discover she is the neglected daughter of Ethel Byrne, famed feminist at those times.

Tensions rise quickly, however, as Elizabeth suspects from the very beginning that Olive wants her husband. She’s right but Olive also wants Elizabeth. Those all parties eventually agree they love each other, a three-way relationship wasn’t exactly in for the early part of the 20th century. And so their romance remains closed behind doors of experiments, some scientific and other just for sex. And it gets pretty darn kinky with their dabbling in submission, bondage, and roleplay.

The deeper the trio go into exploring their sexuality, the more fascinated and frustrated they become. They eventually stroll down avenues of fetish art and bondage costumes, inspiring William’s research and making Elizabeth question how far she’s willing to go down this hole. There’s real passion in what they’re doing but also a desperation for a society that doesn’t accept them they’re pushed back for their secrets. Low on cash, William decides to penetrate pop culture for his ideas on DISC theory by taking everything he has learned and applying it to a comic book. After some convincing of publisher Max Gaines (Oliver Platt), Wonder Woman was born.

From there you can see how the controversy starts up, foreshadowed in the opening of people gathering to burn comic books. Wonder Woman is accused of being far too sexual, angering parents, conservatives, and the publishers who tell William to tone down the bondage. He triples it instead. There’s only so much censorship a man can take when forced up against the wall.

The acting trio of Evans, Hall, and Heathcote are fantastic in these roles. Evans brings that brilliance of a bright mind more blinded by discoveries than his own emotions, relationships, or even health. Hall has a great scathing personality the way she finds herself confident and feisty in matters she’s not altogether sure about how to process, questioning Evans at every turn to make sure he’s not just doing all this for sexual arousal. And Heathcote embodies a great fragility when it comes to matters of sex and love that have confused and made her less confident, making her boldness in honesty towards the end a very powerful climax.

Professor Marston and the Wonder Women is like that dirty bit of history a high school student finds and can’t wait to share. The film certainly amps up that giddiness with the material as well as the romantic tension and sexual discovery. There’s great energy present, especially with the smash-cut of Wonder Woman’s most suggestive moments and the three-way acts going on behind closed doors. Thankfully, the film is just more than eroticism and comic books, telling a grander story of acceptance in both identity and sexuality, making the film both wild and powerful.