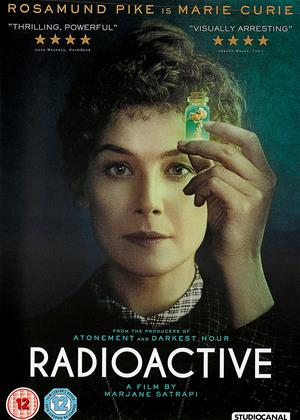 I have loved this director’s past works but this one seemed rather insipid by comparison. This film showed Marie Curie’s fight to be taken seriously as a female scientist and a foreigner in France. Perhaps there should have been lighter moments to contrast with her struggle. Still a worthwhile film to watch!

Interesting biopic of Marie Curie, although as the title implies it’s equally a history of radium, polonium and radioactivity, which she discovered. There are even brief dramatic reconstructions of future events such as Hiroshima 1945. The science could be better explained and, as with most biopics that cover the subject’s whole life rather than focus on the most interesting part of it, the tone is uneven. After we’ve become involved in Curie’s personal and scientific life in Paris with her colleague and husband Pierre, the events of her later life with her eldest daughter, though equally important in reality, come across as an anti-climax on screen. Still, it’s a fascinating story of a remarkable woman and a very watchable film.

Her struggle as a female as a scientist, the impact on her marriage.

This is a well told story and easy to follow the science ( so don't let that put you off). There was so much I discovered I did not know about Marie Curie which was excellently acted by Rosamund Pike. For such a brilliant woman her life was quite a struggle which the film quite rightly does not try to romanticise. I wish they taught some of the history of science at school as well as the actual physics and chemistry - this film really brings to life the huge breakthroughs that Marie Curie made and the hard work and determination she needed to succeed.

Marie Curie deserved better than this meandering 'biopic'.We have flashbacks, flash forward , dream sequences and sex, but very little of the science which inspired her.

Marie Cure had a hard, complicated life but is one of the intellectual giants of the past Century. She was a friend of Einstein (she went on holiday with him). She became a National Hero in France, her adopted country. Both these points are missed out in the film! However, The film just about does her justice and the cast is excellent - a very atmospheric production.. hard to make such a complicated biography accessible- but it works!

Very good historical drama about the real life Marie Cutie in France.Worthwhile to watch. I knew of her,but little details of her life& work. So learnt a lot.

Great performance from Rosamund Pike as Marie Curie encountering the trials and tribulations that being at the forefront of science and being a woman had to get her message over.  Two Nobel prize wins still did not help win over the doubters or senior members of the Scientific academia.  Interesting were the inserts of incidents post Ms Curie's death and aftermath of them.

What a pity, such an incredible story about a wonderfully inspiring woman which has been dumbed down to the nth degree, awful casting(Pike should have run for the hills), terrible terrible script and stuttering screen play makes for a totally boring piece of cinema - Hollywood at it's worst

A dignified and composed biopic about Marie Curie and her ground breaking discoveries of radiation and the elements radium and polonium for which she won two Nobel Prizes. Rosamund Pike plays Curie as a somewhat stern, although with hidden passion, scientist battling the patriarchal establishment exemplified in a strong cameo from Simon Russell Beale. The story is adapted from a celebrated graphic novel and covers Curie's relationship with her equally brilliant husband Pierre (Sam Riley), whom she is suspicious will take the glory of her discoveries but who she also passionately loves. The story is told with respect in a fairly standard period biopic structure although the addition of scenes in the future of the bombing of Hiroshima, the US nuclear testing and the Chernobyl disaster linked with the use of radiation for cancer treatment breaks this up into something that makes the film more interesting. Especially good is the addition of Curie's involvement in the First World War and the introduction of battlefield x-ray machines. A respectful portrait of an important woman of science, a Polish emigré, who found her key place in the world despite the obstacles constantly put up against her. Worth checking out.