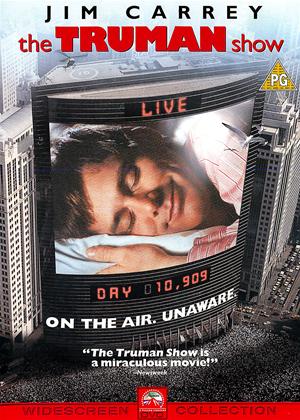 Reviews (2) of The Truman Show

In 2013 we're accustomed to reality TV shows and unfortunately also accustomed (although we don't like it) to living in a 'surveillance society'. Yet back in 1998 when 'The Truman Show' was made such things were unheard of; the TV show 'Big Brother' was first broadcast in The Netherlands in 1999 and the concept of 'Big Brother' in the 1994 sense was something to be very scared of, and perhaps still is.

So the premise of 'The Truman Show' was in its day a science fiction fantasy, an uncomfortably close look at the manipulative nature of a future media world and its potential for cynical exploitation - yet here we are 15 years later where real world events may be approaching that futuristic fantasy.

Jim Carrey plays Truman Burbank who was born and has lived his entire life within a closed world, a giant TV studio, surrounded by actors - and he believes that this world is real. He is unaware that all around is false and that his entire life and personal relationships have been manipulated and that he is watched by 5000 cameras 24 hours a day - until he begins to suspect and tries to escape. The creator / producer / director of this fantasy world, Christof, is well played by Ed Harris in a stand-out role for which he was BAFTA and Oscar nominated.

At that point in his career Jim Carrey was known for his manic comic acting talent - and here he shows a mature dramatic acting ability. Both he and Ed Harris, neither of them obvious choices for the roles, are excellent. The director is Peter Weir, known for 'Picnic at Hanging Rock', 'Witness', 'Dead Poets Society' et al and the combination of an excellent director, an excellent script and excellent acting talent created an excellent film - one of my favourites.

I find 'The Truman Show' quite scary - it's not a future that I want to see nor do I want to see a world where millions of viewers are glued to reality TV. I felt sorry for Truman cocooned and imprisoned within his too-perfect, too-clean, too-white, smalltown USA seaside town - and while the ending is (of course!) too Hollywood, I was very pleased for him and pleased that he had, at last, got one over on baddy Christof.

In case I don't see ya, good afternoon, good evening, and good night! - The Truman Show review by CP Customer

The Truman Show is that rare thing - a brilliant, original idea made into a compelling, funny and touching film. I was not a Jim Carrey fan before seeing this film but he is very good in the lead role, and is well supported by the whole cast. Definitely worth watching.