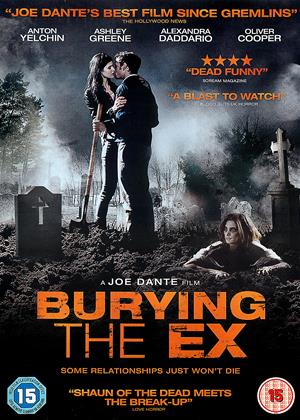 Reviews of Burying the Ex

Director Joe Dante is such a horror nerd that the setting of Burying the Ex seems right within his wheelhouse. It centers around a group of horror movie lovers who work for Halloween shops and horror themed ice cream establishments. It makes reference to several horror classics with a giddy sense of thrill and relation. All these elements have that certain sense of fun the way Dante stages all his pictures. But rarely does that creative buzz ever translate into the core plot of one man trying to kill his zombie girlfriend.

It’s another case where a movie based on a short film has very little to expand upon. We’re presented with horror buff Max (Anton Yelchin) as a likable enough guy working towards his goal of running his own Halloween shop. It can’t be any worse than the one he works for now which requires him to say goodbye to customers with “go to hell.” The only thing holding him back is his girlfriend Evelyn (Ashley Greene), his polar opposite and crusher of his goals. She works for an environmental blog agency so she’s naturally a major buzz-kill for nearly every aspect of Max’s life. The only reason Max is with her is the same tired excuse for dark comedic romances: she looks hot and he believes he’s extremely lucky to have a hot chick even if she hates everything about him.

When Max finally meets Olivia (Alexandra Daddario), an ice cream shop owner who shares his horror passion, it becomes painfully obvious that he needs to breaks up with Evelyn. But on the day he decides to break up with her, she’s killed by a bus. Grim, but things only seem to get better for Max after that point. That is until some black magic winds up making Evelyn rise from the grave as the psycho ex-girlfriend turned zombie. And since Max is such a nice guy, especially around gruesome zombies with superhuman strength, he still finds it hard to break up with his girl be it with words or a knife.

This could be a solid premise to utilize some of those horror smarts Dante has built up over the years. Sadly, most of the picture plays out as predictably as you’d expect. The zombie version of Evelyn does yoga and ends up contorting her limbs unnaturally. She desperately wants to turn Max into a zombie as well in her compulsively possessive ways. And even though her limbs are brittle and her hair easily torn out, she still has plenty of strength to break through walls when Max starts hinting about a breakup. She vomits embalming fluid, starts craving brains and pulls herself together after breaking her neck. All of this seems pretty standard for a picture about breaking up with your zombie girlfriend for being as uncommon of a sub-genre as it is.

The best part of the movie lies in the cast. Everybody throws themselves into their parts to play up the roles for all their worth. Yelchin is admirable as the plucky horror nut who gushes over Fruit Brute cereal and Greene is convincing as the overly toxic girlfriend. Alexandra Daddario as Olivia and Archie Hahn as Max’s horror-loving friend Chuck would seem to have lesser roles, but they’re given a surprising amount of time on screen to develop into likable characters. I just wish there was more for them to work with in a plot that rarely deviates from its predictable course.

Perhaps it’s the low budget or the short time the movie was shot in, but Burying the Ex just doesn’t hold that same level of genius from Joe Dante’s long resume of pictures. As a horror lover, it’s a film I want to praise especially with a cameo by Dick Miller. But at the end of the day it’s just not up to snuff with Dante’s previous works of shocking horror and dark comedy. That being said, it’s not a terrible movie in that it features a charming E.C. horror vibe and small moments of wicked humor. It’s impossible not to smile a little at the fact that a crazed zombie girlfriend is still concerned about not getting blood on a carpet runner.