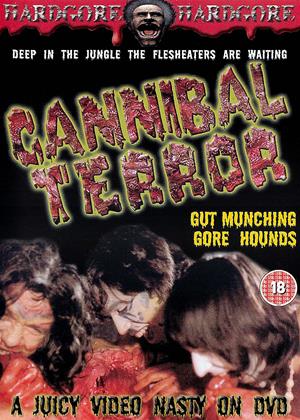 Synopsis:
Mario (Antonio Mayans) and Roberto (Antoine Fontaine) are small-time cons and decide, along with a female companion, to kidnap a young girl and hide out at the home of a friend who lives in the jungle. However, after Mario rapes his friend's wife he is tied to a tree and left to be eaten by the cannibals that live in the jungle. The wife also lets the parents of the hostage know where she is being held, and Roberto and colleagues have to not only flee the flesh-eating natives but also the authorities...
Actors:
Silvia Solar, Gérard Lemaire, Pamela Stanford, Olivier Mathot, Bertrand Altmann, Stan Hamilton, Antoine Fontaine, Antonio Mayans, Michel Laury, Annabelle, Mariam Camacho, Antonio Jover, Amparo Marsilla, Montserrat Salvador, Sabrina Siani, Bernard Thébault, Chris Yebenes, Alain Deruelle
Directors:
Alain Deruelle, Olivier Mathot
Producers:
Daniel Lesoeur
Writers:
Julio Pérez Tabernero, H.L. Rostaine, Jesús Franco
Aka:
Terreur Cannibale
Studio:
Screen Entertainment
Genres:
Classics, Horror

Often referred to, when it is referred to at all, as a ‘video nasty’ from the 1980s, ‘Cannibal Terror’ is not the work, as some believe, of prolific Spanish Director Jess Franco. French Alain Deruelle can take responsibility for this: Franco was filming ‘White Cannibal Queen’ at the time, and when he stopped filming, Deruelle begun, using the same sets and some cannibals from Jess’s production. This even stars a few names from his repertoire, Pamela Stanford (as Manuela, sporting a black wig) and Antonio Mayans (as the diabolical Mario). Olivier Mathot is also on hand as the rather aged father of little Anabelle. The child is kidnapped (off camera, which is strange for a key dramatic moment), and the ensuing chase to sun-drenched outlands is what fuels the story.

Perhaps dullness is this film’s biggest sin. With such an emotive title, you would expect more spectacle than we get here. It might be unkind to suggest these three are the only actors in the production, but it would be true – and that includes those ‘voice artistes’ responsible for the dubbing. Other cast members are uniformly dreadful, clearly having a bit of a laugh rather than delivering anything, which is absolutely fair enough: view this film in the same way, and you may even enjoy it. But ‘a bit of a laugh’ is stretched following certain distasteful developments ‘Cannibal Terror’ has to offer, as well as the grisly gore close-ups (presumably involving animal innards replicating the human variety).

Purely from a practical view, if you are a fairly inept outlaw on the run with the kidnapped child of a rich family, one of the least sensible things to do is to brutally rape the young wife (Stanford) of the friend who is giving you refuge. This is what Mario does. A couple of scenes later, Manuela instigates a wild party with everyone, dancing and offering to strip and having a laugh. Has she forgotten her earlier trauma? Certainly Mario seems a little grumpy, but apart from that, it is business as usual. Bizarre.

The cannibals are a mixed bunch of awkward-looking, painted youths and middle-aged males, a fact conceded by Deruelle – who has never seen the completed film – who gave up any pretence at authenticity when he saw the paucity of the budget. Nice musical score by Jean-Jacques Lemêtre though, although his theme for the film is as far away from anyone’s idea of ‘terror music’ as you can get. That the cannibals turn out ultimately to be rather nice, especially the younger gang-members, should put a smile on the hardest of faces. My score is 5 out of 10.