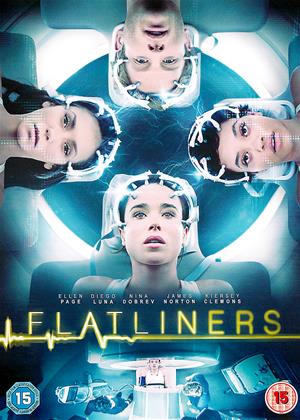 You can imagine why someone would want to reinvent 'Flatliners'. The Kiefer Sutherland original is now 28 years old as I write this in 2018 (yep fellow 80s kids, it's been that long, lol) so its ripe ideas might be missed by a new generation who might not want to troll back through quarter of a century of movie history looking for supernatural thrills.

The idea of young doctors wanting to experiment with seeing what happens when you die, and ending up haunted by their sins, is a potent one. It's ripe with possibilities. The original only mined some of those possibilities, and often descended into cheese (despite being very enjoyable).

2017's version has an equally talented cast, including Ellen Page, James Norton (currently rumoured as a Bond candidate) and Diego Luna (Rogue One).

Despite attempts to round everyone out, only Luna's smarter, quieter professional seems like a rounded human being, and Kiefer Sutherland brings a welcome nostalgic touch as well as a fearsome bite as an impatient superior. Page feels like a blank slate with 'movie character grief issues', Dobrev's 'Marlo' simply seems insecure, Norton's 'Jamie' feels like he should have 'I'm the wild one' stencilled on his forehead, and Kiersey Clemons' 'Sophia' is appallingly written, for reasons I'll mention in a moment.

The film follows the original's template by suggesting that something supernatural has been irked by the gang's experiments, and they must set about trying to make sense of the eerie visions and disturbances that start to plague them.

To its credit, it pulls some shocking surprises that I don't recall being in the original, and introduces an alluring reason to keep attempting the experiment. But some of the fixes for the characters' woes feel too easy - like they haven't been earned. One in particular feels completely conflicted and self-serving. Sophia is repeatedly shown as an easily cowed victim of emotional abuse, meaning that her sin feels unlikely and hugely out of character. It's also done for an astoundingly selfish reason, and her apology feels equally self-serving and insincere - surely something that the forces in play wouldn't accept?

Problematic writing like this plagues the remake. The actors are high quality but their roles feel cold and remote. You never invest in them as strongly as you did with the 90's cast.

The tension isn't always up to scratch either. Some sequences carry a frisson of fear, but others feel slack or illogical.

It's interesting to see what they did with it, but Flatliners is one of those sequels that are about as necessary as a light-up kettle. It's flashy and expensive, but there's already an older version that does the job just fine.

Any idea can be woven well, even if from worn fabric. Flatliners has some potential to be a better film for the premise of being able to experience death as a high with trippy after effects. Think about how crazy and inventive the film could be for characters that take a momentary dip into the next realm and scramble their brains just enough to become more intelligent. They continue to do so and gain more intelligence while their mental perceptions continue to be damaged and deteriorate. In its place is a lackluster remake that weaves the operation into little more than an excuse for tired spookhouse frights.

Similar to the 1990s original, five medical students stumble upon a theory in their studies of the human brain. Courtney (Ellen Page) has a great deal of interest in the afterlife believes she has devised a method to make a brief trip to the other side. Her bizarre reasoning is that if she can stop her heart for sixty seconds and then revived, she can experience what death is like and live to tell the tale. She manages to convince some other gullible med students into helping her out, enticing one foolish boy with sex which he believes will be a three-way when Courtney brings in another female student. Ironically, a three-way would be the least crazy thing these students would do.

Courtney's experiment is successful. She views the trippiness of the other side and returns with an astounding ability to play the piano she didn’t have before. The five students that surround her soon discover that going for a few seconds makes one smarter and they all decide to take the dive. This experimentation is treated like a drug trip, where one student excitedly raises their beer to toast “It’s a good day to die.” Being dead for so long for so many times would naturally lead one to believe that brain damage and reduced functions elsewhere in the brain may occur. But, again, because the film must be horror and fulfill a spooky quota, the side effects of the dead-not-dead experiment only bring out scary visions. Mysterious babies can be heard crying when there is none present. Strange figures of the past scrawl in a corner. Visions of drowning cloud the mind. And there’s a frightening specter that involves hacking and sending nudes. How scary.

Is that all there really is to the death trip? Can the other side really be so bland as a standard horror picture of hauntings most bland? Even when the students acquire all these extra skills, what do they use them for? Party tricks and better grades. Sure, when you’re a med student, that’s all that may seem to matter. But wouldn’t students stumbling on something so shaking to the soul they could use their newfound gifts for something grander. Perhaps they don’t want to show off too much less their superior, played by a returning Kiefer Sutherland, becomes wise to their secret kink of stopping their hearts.

Flatliners suffers from a dull-as-dishwater treatment for digging up a mild cult hit and dressing it up in the tattered old garb of a haunted house picture. The scares are lukewarm at best but the script itself is most infuriating for all the potential it holds and how little it extracts. If being dead for a certain amount of time makes you smarter, Flatliners needs to go under for twice as long to improve its intelligence. See you in forty years for the next Flatliners remake.