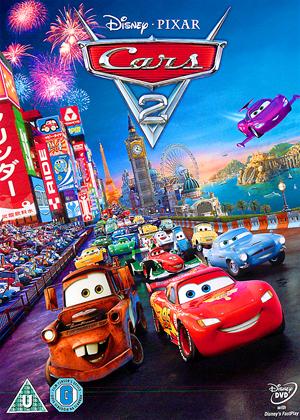 Sign up
Legend of the Guardians: The Owls of Ga'Hoole

‘Cars 2’ reunites Lighting McQueen (Owen Wilson) and his sidekick Tow Mater and this time, instead of roughing it local – they’re going international! McQueen and Mater experience the glamour and exhilaration of joining the Formula One race and if they thought they’ve had their fill of rubbernecking in Radiator Springs, they’re in for a cutthroat ride of their lives.

Tow Mater gets his leading man status as we follow his (mis)adventures as he meets British spies: an Aston Martin named Finn McMissile and Holley Shiftwell. They are highly efficient and jacked-up models – they’ve got wings, weapons, and go underwater – and Mater’s excited, not knowing that the spies suspect him to be one of them too, only with a dumb-ed down and spectacularly clever disguise, and even Shiftwell finds him attractive. Could it be that Mater can get the girl?!

‘Cars 2’ is a show-off piece of Pixar’s animation technology. The wonderfully-rendered backdrops and original cars designed for the movie are astounding, and when seen on 3-D, eye candy doesn’t even begin to describe it. ‘Cars 2’ also blows your mind with the action and speed, the animated smack-downs of cars versus cars won’t let up. However, in what ‘Cars 2’ exceeds in animation expectations, it lacks a coherent story that is too complicated for kids.

We have Mater playing spy games while Lightning McQueen battling it out with his former nemesis, Italian champ Francesco, all the while championing why it’s best to use clean fuel Allinol over gasoline. It’s not a bad thing to insert a subliminal message of going green, but to be so heavy-handed about it? Unless it’s titled ‘Cars 2 and the Planeteers’, that would have been acceptable.

Among all of Pixar’s projects, the movie ‘Cars’ was considered a dud because the animation is cars with eyes. With ‘Cars 2’, it’s better to see but good luck if you can comprehend.