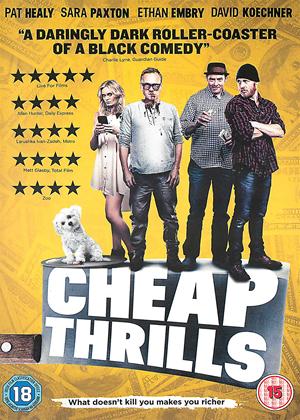 One of my favourite genres for commenting on social, cultural and political fears, trends and movements whilst still managing to be entertaining, the horror genre continues to be looked down upon by a lot of critics and audiences. When one finds a film that trades in horror, humour and parable therefore I often feel compelled to shout about it.

Now don’t get me wrong I am not claiming that Cheap Thrills reaches the same socio-political heights as the original Night of the Living Dead, nor am I suggesting that it’s combination of humour and horror is anywhere as well managed as say the hugely popular Shaun of the Dead; however Cheap Thrills is a very well put together, thoroughly entertaining and nuanced picture that I think will really please fans of the genre.

Add to that the great but understated use of setting and I would go as far as saying that director E.L Katz will be one to watch out for over the next few years.

With a narrative that requires little preamble, a man is contacted by an old friend to partake in a game of dares with a strange and sadistic couple, Cheap Thrills is a gory and teeth clenchingly unpleasant story of one-upmanship. It may not sound like much but going in with little knowledge and scant expectations is the best way to view Cheap Thrills as the subsequent feature will take you even more by surprise.

Doing exactly what it says on the tin this is a collection of indulgent and occasionally disgusting cheap thrills for any horror lover, but with the added bonus of some fantastic scripting and utterly brilliant casting – Sara Paxton in particular proves her talent and versatility as the bored and dissociated housewife trying to light a fire in her near dead soul – Cheap Thrills is yet another great horror film to come out of left field sailing on the tides of festival success.