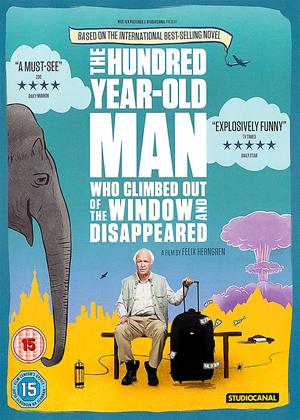 Synopsis:
Based on the internationally best-selling novel by Jonas Jonasson, this is the wonderful and unlikely story of a 100-year-old man who decides it's not too late to start over. After a long and eventful life, Allan Karlsson ends up in a nursing home. A big celebration for his 100th birthday is in the works, but Allan really isn't interested. Instead, he climbs out of a window and embarks on a hilarious and entirely unexpected journey - involving a gang of criminals, murderers, a suitcase stuffed with cash, an elephant and an incompetent policeman. It would be the adventure of a lifetime for anyone else, but Allan has a larger-than-life back-story.
Not only has Allan witnessed some of the most important events of the twentieth century, but he has actually played a key role in them, including the invention of the atomic bomb and sharing meals and more with everyone from U.S. presidents to Russian tyrants. For a hundred years, Allan Karlsson rattled the world, and now he's on the loose again...
Actors:
Robert Gustafsson, Iwar Wiklander, David Wiberg, Mia Skäringer, Jens Hultén, Bianca Cruzeiro, Alan Ford, Sven Lönn, David Shackleton, Georg Nikoloff, Simon Säppenen, Manuel Dubra, Cory Peterson, Kerry Shale, Philip Rosch
Directors:
Felix Herngren
Producers:
Malte Forssell, Felix Herngren, Henrik Jansson-Schweizer, Patrick Nebout
Writers:
Felix Herngren, Hans Ingemansson, Jonas Jonasson
Others:
Love Larson, Eva von Bahr
Aka:
Hundraåringen som klev ut genom fönstret och försvann
Studio:
StudioCanal
Genres:
Action & Adventure, Comedy
Countries:
Sweden

I enjoyed the novel and was charmed by its ideas and originality. I feel the film has captured the tale well, although the story has been abridges a bit that isn't a bad thing. The film carries the same atmosphere as the novel, the characters are well cast and the story moves at a good pace. It's subtitled, although some passages are in English. For me the subtitles didn't detract from the enjoyment although I did sometimes find them hard to read against changing backgrounds.

I enjoyed this film - but found the second half a bit 'jumping the shark'.

The first half however is hilarious, as an old man encounters various random happenings which lead him to be pursued by a gang of heavies and the police: in this it's a bit Ealing Comedy really! Some larger than life characters too make this a treat.

The action is intercut with this man's memories of his oddball life. These episodes - though utterly surreal and farfetched - manage to hang together well and there are some laugh out loud moments. Of course, this will bring to mind Forest Gump (which I hated) or Zelig or Orlando, as the man is shown in his youth in the companies of dictators and presidents etc. But it rattles along fine, and I loved all the explosions too!

Until we move into the second half, where twee silliness and absurd coincidences strained my suspension of disbelief in the characters and story. An East End cockney crime lord living in Bali and his end make this one coincidence too far.

Having said that, it's an unusual and different film, though there is rather a glut of novels at the moment of old people going a-wandering (that Harold Fry book and many others). It seems a subgenre all its own now maybe?

Still, I enjoyed watching it and it was better than I expected - so 4 stars just for that first half.

I have not read the book so felt 'innocent' to seeing the film, which I prefer to do. Either see the film or read the book otherwise one lands up comparing the two and then work out why the film did not follow the book, etc, etc.

So I found this film lovely. It has quite a simple plot adding characters as the film moves along. I thought the actors did a fine job and the pace of the film was good, slow-ish, as it should be with a hundred year old! The feel of Sweden through buildings and props looked appealing, although I think parts of the film were shot in Hungary and Croatia. However if this had been made in Hollywood, it simply would have been labelled a B rate film as they would not have pulled off the feel that our northern European chums have done.

A previous review mentioned the cockney London villain; I don't know whether that character is in the book but although his dialogue raised the film pace during his part, it might have been better to have had a local villain instead. But never mind! Relax and enjoy it.

Funny, entertaining, mad - The Hundred Year-Old Man Who Climbed Out the Window and Disappeared review by RL

It's funny, it's entertaining, it's a little bit mad. Rented this a couple of years back but have just purchased it as I want my friends to be able to see it. Fans of Wes Anderson will enjoy as it's a *bit* similar to his stuff.

Jim Jarmusch missed this one. - The Hundred Year-Old Man Who Climbed Out the Window and Disappeared review by NC

Bit zany, but also different from the norm. Never do subtitles in any form, but battled through it as is quite a quite but clever take on old age. If he was a 100 he had better knees than me by miles

Haven't read the book so didn't quite know what to expect but it certainly wasn't this! Hard to determine a specific genre as it's all a bit chaotic and zany. Mistaken identities, miscommunications, stubborn old men, people being in the wrong place at the wrong time, even people being in the right place at the right time! Partially sub-titled. Black humour and lots of coincidences so you need to suspend disbelief.