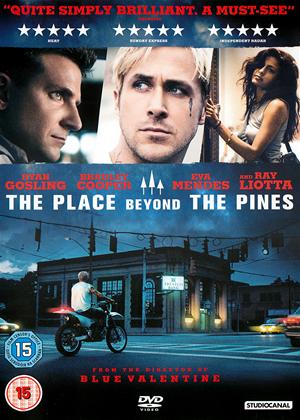 Rent other films like The Place Beyond the Pines

Reviews (1) of The Place Beyond the Pines

Ambitious! - The Place Beyond the Pines review by Schrödinger's Cake

This is an ambitious film that attempts to pull together a collection of interwoven sub-stories, into a single, cohesive film.

On so many levels, this is not an easy film to watch. The characters, whilst rich and wonderfully acted, are almost universally challenging and unlikeable. The story is intricate. Multi-layered, subtle and fragmented. It requires attention and care to watch and comprehend. The plot is not handed to you on a platter or spelt out. Here, you must work for it.

If you are looking for a throw-away film to fall asleep to, then this isn't the one. However, if you want something a bit more taxing, then you've come to the right place.

The Place Beyond the Pines review by Alyse Garner - Cinema Paradiso

Before I begin my review of this film I must explain why I have seemingly given so much away in my initial synopsis; though plot twists and revelations are key aspects of the outplay of this story the three act structure and midway narrative flip of the Place Beyond the Pines can hardly be understood without an in-depth explanation of the events, despite this it is not the events but the characters and emotions that truly fuel this story.

Ryan Gosling stars as Luke, a motorcycle stunt rider, who turns to crime after he discovers he has a son from a brief fling. However, following one particular robbery Luke finds himself ruthlessly pursued by new cop Avery Cross (Bradley Cooper). The aftermath of Luke and Avery’s final and deadly encounter turns the film into a tense drama that explores police corruption, guilt and the sad repercussions affecting the next generation.

Despite a difficult first half the key theme of the Place Beyond the Pines is highlighted at the very start and carries well throughout; the potentially dangerous and harmful ramifications of the actions of a small selfish few echo far further than we can really appreciate.

The film doesn’t come across at all preachy however, the final moral message embedded in a edgy thriller that holds your attention well; beware the first half of the piece, where some of the aspects of the story appear a little shaky and underdeveloped, the characters and performances quickly distract from these issues however helping the film’s 140 minute runtime speed by.

Blue Valentine director Derek Cianfrance returns to well used and honed camera techniques, including long tracking shots that follow Gosling’s big tattooed body around in the first half, and countless extreme close ups – that Cianfrance seems to think aid in the development of his characters but that in fact distract from the great performances already inherent in the piece.

Overall it’s the casting choices that really make this film, the ineffable Gosling is excellent once again as the driven stunt rider who does an immediate 180 turn upon discovering he is a father, whilst Cooper reminds us once again that he is not just a crude comedy actor of the likes of the Hangover franchise; his complex lawyer turned cop balancing constantly on the thinnest of moral lines his judgement and ethics constantly in question. Eva Mendez shines as the father of Luke’s baby whilst the Australian Ben Mendelsohn is spot on as the manic bank robber who introduces Luke to what will eventually be his destruction.