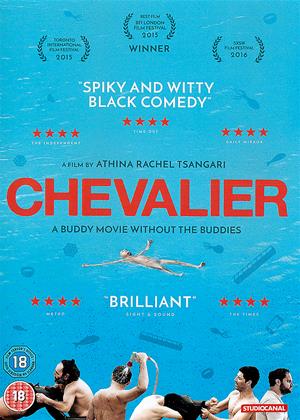 Synopsis:
In the middle of the Aegean Sea, on a luxury yacht, six men on a fishing trip decide to play a game. During this game things will be compared. Things will be measured. Songs will be butchered, and blood will be tested. Friends will become rivals, and rivals will become hungry. But at the end of the voyage when the game is over, the man who wins will be the best man. And he will wear upon his littlest finger the victorious signet ring: the 'Chevalier'.
Actors:
Giannis Drakopoulos, Kostas Filippoglou, Yiorgos Kendros, Panos Koronis, Vangelis Mourikis, Nikos Orphanos, Makis Papadimitriou, Yorgos Pirpassopoulos, Sakis Rouvas, Katerina Vrana
Directors:
Athina Rachel Tsangari
Producers:
Maria Hatzakou, Christos V. Konstantakopoulos
Writers:
Efthymis Filippou, Athina Rachel Tsangari
Aka:
Chevalier Athina
Studio:
StudioCanal
Genres:
Comedy
Countries:
Greece, Comedy

Worth a watch - Chevalier review by dl

While this sort of goes nowhere it does become quite fun getting there, its concept is pretty simple but a neat one, several men take to the sea’s on a luxury yacht play a series of games that eventually ends up turning into who is the best person among them all, it soon gets petty as the competitiveness drives them against each other by scoring marks on everything about their manliness and insecurities, the further it goes the more absurd it gets with quest that include silver polishing, who can put up ikea units up the fastest too who as the biggest erect penis ect. The performances and the dry humour works really well along with the great shots of Greece and its coastal line, it will be a one time watch but that doesnt mean to say it wasn’t an enjoyable one.7/10Worth a watch

I lasted 40 minutes on this. IT IS AWFUL. It no doubt thinks it is profound and meaningful, and some sort of study of modern masculinity. It is not. It is RUBBISH.

The one star is for the pretty Greek scenery - and the scene of bashing octopuses against rocks to remove the slime, which you see all the time in Greece (and allegedly sometimes fisherman, ahem, pleasure themselves with them...)

This film is the sort of foreign film that gives foreign films a bad name. 40 minutes of my life I am never getting back.

Chevalier is that rare instance where and adventure flick and character drama collide to give us what is known as the most original ‘battle of the wits’ foreign movie till date. This is to say Athina Rachel Tsangari’s product not only provides the masses with entertaining scenes where different characters put their antics to the test – it also packs enough momentum to propel this buddy comedy drama on the highest reaches among contemporary Greek cinema. Chevalier is good and it itself knows it, and the audience agrees too.

The feature starts off with six men on a boat, in a simple game of competition between them, which nevertheless escalates to a point of ‘who’s the best among the bunch’. It’s a locker room banter elevated to a whole new level: namely later involving even the stuff that happen to find themselves on the fishing boat. Soon, everything compares to everything else as Sakis Rouvas, Makis Papadimitriou, Yorgos Pirpassopoulos, Panos Koronis, Vangelis Mourikis and Yiorgos Kendros clash their manhood in a battle that erupts in the middle of the Greek seas, with nowhere to go.

Also, the comedy aspect of it doesn’t need to remind us that is funny: rather, the various character traits resurface from said characters and give us the complete picture of who they are and why they do what they do. Initially, everyone thinks he’s the best, but as trials put their will to the test, doubt soon creeps underneath their ego and with the careful, meticulous direction of Athina Rachel Tsangari, as well as the smart screenplay by scribe Efthymis Filippou – we finally see them as they really are, and not what they think they represent.

In its core, Chevalier is not about how an individual is valued in a society – it’s rather how said society perceives the individual and what expectations are put onto his shoulders which he must fulfill in order to achieve higher status than his peers. The film’s comedic aspects come out of a careful observation of everyone’s psychology and quirks which all carry within their confined characters shells. Which is to say, they’re all fleshed out to perfection, given the circumstance they find themselves in, and all use their strongest character traits to their advantage – whether it be singing, putting together a shelf, or even withstanding of being rude toward one another.

Where Chevalier differs from other features we all came to know and love, is the acting: it feels as natural as the actors’ second lives. This is where most Hollywood pieces stumble on their toes, but not Tsangari’s feature. As everyday people, the actors are convincing enough to a point of not being recognizable when their film lives up its premiere day.

Finally, Chevalier is that ‘man flick’ for both men and women to enjoy: the former for the unsuspecting comedy and clash of character – the latter to finally understand why men act the way they do in real life.