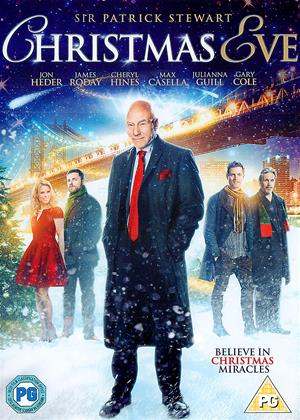 Apart from fairly raw dialogue, is nothing really to make a note of. Fairly predictable in most departments. If like banal American then will go for this one.

An absolute rubbish film. I am surprised at Patrick Stewart appearing in it. Not even really Christmassy!!

There’s something to be said for Christmas Eve’s anthology of bottle stories in reflecting the teeth-pulling aggravation of spending the holidays with people you don’t really like. A handful of cartoonish characters are all trapped in different elevators on Christmas Eve after a van smashed into a power box. They desperately want to escape, as did I. Who would want to spend the most stressful time of the year confined to a tiny space where people fart, argue about prayer or make the most dull of melodramatic confessions? I suddenly now appreciate my family’s faults all the more now.

Here is a quick rundown of the Lifetime/Hallmark stories at play.

Gary Cole plays a bitter doctor about to perform surgery when he becomes stuck in the hospital elevator with a patient undergoing surgery. He’s a fervent atheist that when asked by his patients for a prayer, he merely scoffs with the usual “where is your loving god” bit. Of course, he shares an elevator with some devout religious types that will attempt to convince him that there is a higher power and that he should pray for his patients. This is essentially God’s Not Dead: Travel Edition. Try to grill that mean old atheist with iron clad Christian logic anywhere and anytime! No classroom or courtroom required!

A collective of orchestra musicians go crazy while waiting for help that they begin making confessions, try to decipher who farted and fire a gun inside a closed space. I assume they’re meant to be the comedic relief, but they’re more like the comedic napalm. Any hope of humor in this pale Love Actually style Christmas drama dies with them in some of the worst sitcom dialogue you’ll ever hear.

Two young single people begin to flirt inside their elevator, but it’s an awkward and uncomfortable romance that develops as the male photographer comes on way too hard to the shy girl in the corner. He pretends to be on the phone as a joke and will later corner the girl into loving him with an assault of flashing photographs. I’ve been out of the dating game for a decade, but I’m fairly certain snapping pictures of a girl continuously isn’t going to win her heart. Just because it worked in Blow-Up doesn’t mean it works everywhere.

Jon Heder plays a recently fired employee that shares an elevator with the boss that fired him. Their dialogue is painfully dull, but is thankfully saved when they start talking about a revolutionary new idea in producing energy. It’s stupid and not at all interesting, but it beats back and forth about fantasy football.

The worst elevator of all is the one filled with two ditzy young girls, a Santa stripper, a germaphobe and a nerdy intellectual. This sounds more like a terrible spin-off of The Real World or a really bad idea for a network sitcom. What sort of crazy hijinks will they get into? Nothing much - just brain teasers to pass the time, such as describing the saddest things on Earth. Even these characters act more as though they’re killing time than revealing anything unique about themselves.

It would figure that the one major star of the picture, Patrick Stewart, doesn’t share an elevator with anyone. He plays a grumpy rich man who wants his penthouse built just right and will fire anyone who says otherwise. Stuck in the freezing cold, his character will blabber to himself until eventually breaking down into tears about being a bad guy. It’s hard to say if this is from the cold, the emotional realization or just the terrible dialogue Stewart is forced to speak.

I could go after director Mitch Davis for staging a hokey holiday drama with strong leanings towards the LDS church. I could be angry at Larry King for producing this mess, seemingly to get one of his wife’s an acting role in the film. I could even go on a tirade about how the film wasn’t actually shot in New York, but in Bulgaria. But, like the protagonists, I’m too exhausted from such an awful experience to get all that mad at such trash. It’s not as insulting as some of the more aggressive Christploitation examples I’ve seen (see Saving Christmas), but there is absolutely nothing in this film worth returning for. And based on how horribly dull it is to be in elevators with these characters, I’m taking the stairs more often now.