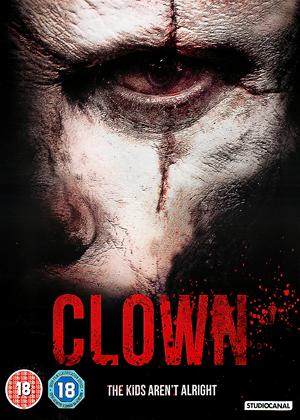 Strange circumstances of a father hiring a clown suit for his childs party, only to find that he cant get it back off. That is the beginning of the suit taking him over slowly with a desire to start killing . Its ok but could of been a lot better.

Imagine what it must be like to dress up as a clown and then never be able to remove the make-up? Well, now you don’t have to – because that is what happens in this film. Unfortunately, that is all that happens in this film. Kent McCoy (Andy Powers) then descends into a vengeful murderer who goes through the motions of many other human/monster hybrids, trying to regain his sanity whilst becoming more monstrous by the moment.

Except that his monstrousness is pretty anaemic, both in visualisation and acting, and this kind of thing has been done much more effectively elsewhere – the distinction here is that the creature is a malevolent demon trapped in a clown suit, and it is the ridiculous nature of that which separates this from other such films. Never once is the viewer invited to worry about the juvenile victims of the creature, never is pathos or sympathy squeezed in between the hollering parents and copious amounts of blood, and sadly, rarely is the titular clown actually particularly scary despite his handful of (off camera) misdeeds, at least not until the end, when the mutation nears completion. By this time, of course, McCoys hitherto placid wife has become ‘supermom’, able to bounce back from her husband’s repeatedly ‘fatal’ attacks.

I seem to have recorded some scathing views about this, and the film really doesn’t deserve them. But what irritates is that, bar the originality and silliness of the central premise, this follows the same route as so many other films. Wife becomes concerned with hubby’s behaviour, finds he has become possessed, seeks the help of someone else who has been possessed and overcomes the evil so she and the family youngster can live safely ever after. Reassuringly, however, it is revealed the demonic suit still exists and is being held by the police as part of the evidence concerning the swathe of killings. So you never know, Clown may be back.