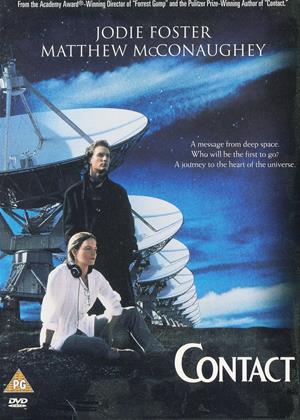 I seem to have watched rather a lot of sci-fi films recently - and here's yet another...

'Contact' covers a lot of ground: first contact with an alien civilisation, conflict - or at least tension - between science and religion, the role of women in science, personal loss and family, political / military machinations, and the power and influence of rich, powerful men in control of multinational corporations.

Fitting all that lot into a 140+ minute film was always going to be tricky and a script that avoids the ridiculous even more so. But somehow it works - and that seems largely down to the very excellent cast (Jodie Foster, Matthew McConaughey, Tom Skerritt, John Hurt et al) and the directing skills of Robert Zemeckis. Even Bill Clinton gets a look in as the US Prez, using gently doctored live footage.

It's all quite slow moving, tension builds slowly (but it is there) and there are some mawkish moments, but these come across as moving rather than (as happens too often in American for this viewer's taste) sick-making. Yes, the 'first contact' theme has been tackled many times before in pulp SF novellas from the 1940s onwards and of course in film, examples including Steven Spielberg's 'Close Encounters of the Third Kind' and 'ET'.

This eponomously-named film is based closely on cosmologist Carl Sagan's book. It handles big ideas with a fair degree of integrity and apart from Mathew McConaughey's rather pop-up performance as an unlikely Fundamentalist preacher friend of Ellie (Jodie Foster), is a realistic portrayal of what might just happen if we really did make contact with aliens. The only other films that handles this sort of material well (i.e. not like the comic-book Star Wars or Star Trek) is Kubrick's 2001 and, arguably, Aliens. Robert Zemeckis is associated with lighter fare (Back to the Future, Roger Rabbit) but here he allows Sagan's vision and challenging ideas to shine - albeit in a glossy Hollywood-ized wrap-around. And no, I don't buy John Hurt's mega-mogul character - but it's still a good device to stitch the film together and keep the action moving along. If you haven't seen CONTACT, it's a great ride - and marvel at the wonderful opening pull-back through space... truly inspirational and (really) awesome!

The plot is interesting if a little stretched. The conflict of religion and science is interestingly explored and the possibility of extraterrestrial life (hardly new) is also thoughtfully approached. Some of the scientist minor roles are well played but generally it is quite ordinary. The dazzling performance of Jodie is slightly out of kilter with this making her look a bit too dramatic. I appreciated it though. McConaughey who I think is so good in Sahara is a bit 2-D in this, I think he played it the same way. The 18 hours of space travel is very good and feels great, wish I'd seen it at the cinema.

This film should be one hour shorter. At 2h 24mins it drags along. The story is not bad, but do we need it to be the life story of the main character? The film only gets going when the alien signal is (rather conveniently) detected.