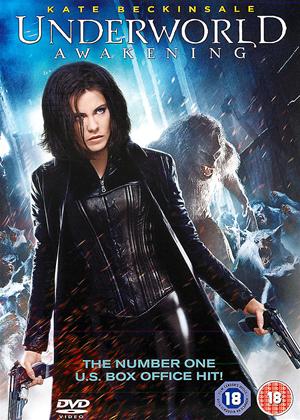 Worst film of the year so far! - Underworld: Awakening review by CS

Awful, just an absolutely awful film! I thought the first three in the series were very good, but this fourth outing is so cluttered and muddled with no sense of direction, a very weak storyline, very little acting or direction, the sets are extremely poor and it's just a mash really right from the start. The first ten minutes really set the scene for what is to come. I wanted to switch off after the introduction as I knew just how poor this was going to be, but forced myself to watch the whole film and it did not get any better. This fourth outing borrowed too heavily from so many other films such as Resident Evil and Day Watch, it was really a low budget gorefest come spaghetti western vs kung fu film, all fighting and blood letting not much else. If you loved the first three then this will be a real disappointment. One big raspberry i'm afraid!!

When humans discover the existence of the vampire and werewolf races Selene must lead the battle against mankind as they attempt to eradicate both creatures. In the fourth instalment of the Underworld franchise Kate Beckinsale returns as Selene a vampire warrior who has previously helped end the war between the werewolf race known as the Lycans and her own vampire tribe. Now the two races must come together to fight a common enemy.

Underworld Awakening has a lot of promise, just as the first three movies did, the concept is interesting and fairly strong, yet Underworld and Underworld Evolutions both failed miserably at achieving their potential by falling into the traps of genre stereotypes and essentially believing themselves to be better than they in fact were. Awakening unfortunately stumbles on the same points.

The 3D visuals is fantastic, as the CGI in all the Underworld movies has been really high class and impressive, adding 3D has only added to the film’s advantage. This is not enough to turn everything around for the movie however; the novelty of 3D has long worn off now and using it to improve a movie with a significantly unimaginative narrative has already been proven ineffective. The absence of the prolific Bill Nighy makes this movie even worse than its predecessors, his performances were easily the height of the previous three movies and with no one quite as impressive or distinguished in the new cast to replace him one can’t help but think the studio has missed a trick there.

In conclusion, I think fans of the previous movies will enjoy Underworld Awakening, perhaps not as much as the original which I am told is regarded as the best released thus far.