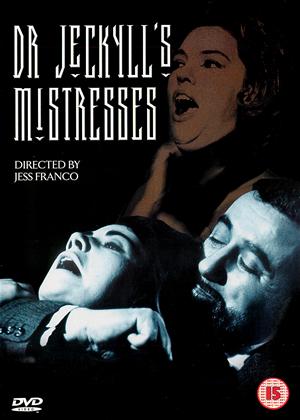 Depending on which version of this film’s title you prefer, this Jess Franco picture might well be seen as a return to the character of Doctor Orloff, originally played so brilliantly by Howard Vernon in ‘The Awful Doctor Orloff’(1962). As someone who became familiar with Franco’s work through his later, gaudier ‘exploitation’ pictures, these earlier entries are a revelation – truly he was masterful at weaving horror atmospherics, a truly talented director of unnerving imagery, using stark black and white to its fullest advantage.

Interspersed with several cabaret scenes – a favourite distraction of Franco and one that would crop up in many subsequent projects – this appears to be the story of lovely Melissa (Agnès Spaak), who travels to a superbly realised sinister family castle owned by her Uncle Conrad Jekyll (Marcelo Arroita-Jáuregui). She has been lead to believe her father Andros (Hugo Blanco) died there recently – except that her uncle has turned him into a somnambulistic zombie who sleeps upright in a glass coffin. That’s what zombies do, of course? Andros is given the full horror treatment in all ways but one. Direction, sinister musical cues, creepy lighting lay the chills on thick – and yet the make-up is far too subtle to justify the screams of hysterical fear that greet his stumbling confrontations with various characters.

Marcelo Arroita-Jáuregui is not hugely effective as Jekyll – he lacks any of the restrained sense of power Vernon had, and Manuel (Pepe Rubio) is occasionally rather irritating as Melissa’s love interest (as juvenile boyfriend characters often are), but the acting is rarely less than adequate. The characters are not as important as the atmosphere Franco weaves, and the sinister world of ‘Orloff’ is pleasingly recreated – whatever the main character calls himself.