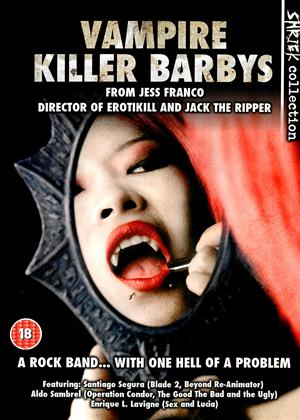 Synopsis:
The Killer Barbys are a touring rock band with a problem. They're stranding in the middle of nowhere and they need to find someone willing to put them up for the night. They end up at the mansion of the countess Von Fledermaus, an ancient woman shrouded in evil. She needs the fresh blood of young men to regain her lost youth, and the Killer Barbys are on the menu!
Actors:
Santiago Segura, Mariangela Giordano, Aldo Sambrell, Charlie S. Chaplin, Silvia Superstar, Carlos Subterfuge, Los Angeles Barea, Billy King, Pepa López, Alberto Martínez, Enrique López Lavigne, Javier Bonilla
Directors:
Jesús Franco
Writers:
Jesús Franco, Patxi Irigoyen
Aka:
Killer Barbys
Studio:
Screen
Genres:
Horror
Countries:
Spain, Horror

Changed from ‘Barbies’ to ‘Barbys’ to avoid confusion with a certain well known blond toy, this Jess Franco film is typically as crass and weird as you may expect. By this time in his career, Franco was about to start working with One Shot Productions, a strictly no-budget company sympathetic to his style, as he was of theirs. So it’s interesting to see that ‘Killer Barbys’ is a comparatively slick affair. For a start, it isn’t shot on video. Secondly, it boasts some fairly impressive production values and set-pieces.

The Barbys are a suggestive punk rock outfit touring in a Scooby-Doo-type van that breaks down, leaving them at the mercy of the sinister Arkan (Aldo Sambrell) and the huge and gothic castle he frequents. There are two distinct styles here, and Franco makes little attempt to marry them together – incessant punky-music-scored wise-cracking and softcore scenes featuring the band, and some nicely lit sinister scenes involving Arkan and the castle’s Countess, punctuated with the antics of skivvy Baltasar (Santiago Segura) and his two dwarf ‘children.’ Interestingly perhaps, band-member Rafa is played by Carlos Subterfuge, who would go on to play a dreadlocked Frankenstein’s Ghost in Franco’s 1998’s ‘Lust for Frankenstein’.

I don’t know what on Earth to make of this, but that is hardly surprising. Clearly a vehicle for The Killer Barbys, much as ‘Spice World’, for example, was a vehicle for The Spice Girls, this venture is a much more lurid and less comprehensible affair. But in Franco’s hands, would you expect anything else? Also, it is enjoyable in its way. There are eerie sex scenes, full nakedness and an expectedly thin storyline. There are also a number of nice gore scenes, perhaps befitting a band with such a ‘raunchy’ image. Main singer Sylvia Superstar as Flavia gets the most to do here, which isn’t a huge amount.

The dubbing in this is some of the worst I have seen, with little or no attempt to marry the lines with the actors. The dialogue is pretty ropey too (“You are the most beautiful bitch I have ever seen in my life,” Rafa informs the Countess by way of a compliment).