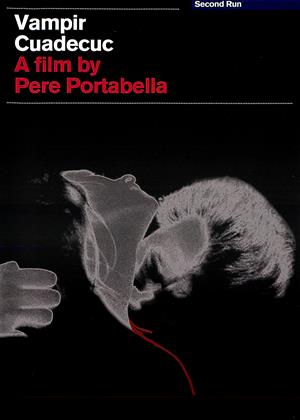 So, what exactly is ‘Vampir Cuadecuc?’ Documentary director Pere Portabella filmed many silent scenes from Jess Franco’s 1970 production ‘El Conde Dracula’, featuring Soledad Miranda, Herbert Lom, Christopher Lee and Franco himself, in stark, heavily grained black and white. There are moments when the characters’ lips move, but there is no dialogue forthcoming. We get a distorted soundtrack of eerie noises, rather than music overlaid throughout, and the result is extremely strange and sinister. Studio lights and sunlight are allowed to distort the imagery and flood moments with light. Interestingly, the story – which loosely follows Franco’s adaption, is punctuated with behind the scenes footage of the cast joking around, or false webbing being applied, the rubber bat in motion at the end of a fishing line and at one point, a speeding modern day train. One scene not featured from ‘El Conde’ is the often-discussed sequence featuring an array of stuffed animals coming to life.

The only dialogue is at the end of the film, with Christopher Lee reading very respectfully Dracula’s death scene from the original novel.

What we have with ‘Vampir Cuadecuc’ is a curiously powerful, abstract experiment, some of which looks very impressive in a noir-ish kind of way, and some of it simply showing actors rehearsing and effects being applied. It reminds me of 1932’s ‘Vampyr’ in that the imagery is stark and sombre and disconnected, but ultimately very moody and atmospheric.

Outtakes from a 'Dracula' movie - Vampir Cuadecuc review by NK

I like the idea of a film that transforms the myth of the vampire into a powerful metaphor for bloodthirsty fascism, with Dracula as the dictator who feeds on his people. That's certainly a metaphor we can relate to in 21st Century Britain where obscenely wealthy vampiric oligarchs suck huge amounts of money out of the economy into their bloated offshore tax havens, whilst ordinary people suffer cuts to vital services and sink into poverty and destitution. I didn't see that metaphor here though. Franco's censors would have had to have been sensitive to the point of paranoia to see any implied criticism of their government in this footage. It's basically outtakes from the making of the classic Dracula movie, shown in chronological sequence, with either no sound or inappropriate sound, like the Victorian funeral where a jet can be heard passing noisily overhead.

This film might be of a certain specialist interest, but I don't really think it's for general entertainment.