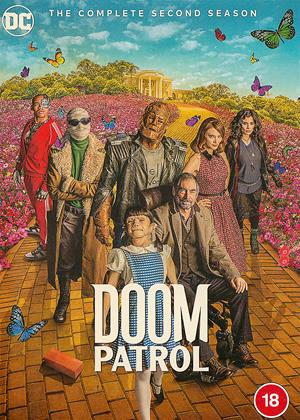 This is the best 'superhero' series out there, involving a weird but wonderful group of characters who have to deal with their own powers, each other and odd characters. All the actors deserve credit for giving their characters depth, especially Diane Guerrero whose multi-layered performance as Jane who has multiple personalities. The series allows each of the characters to breath and they all have their own spotlight. This series allows for more emotional story arc and the inclusion of some great new characters.

The second season of Doom Patrol maintains the weirdness, surrealness, and overall anti-hero appeal that made the first season such a standout of the DC Comics TV series. The first episode picks up right away with the majority of the characters having escaped the painting they were trapped in with Mister Nobody. Now the size of mice, they struggle to find a way to make themselves bigger again, relying on any strange magic or scientific altercations they can muster. And that’s only the FIRST weird thing that happens to them.

With Mister Nobody kinda/sorta out of the picture (Alan Tudyk seemed to be busy on Harley Quinn considering the meta dialogue used for his departure), this season focuses more on Niles and his estranged daughter Dorothy. She has been stuck as a child for years and Niles also kept her hidden away from the world. Having endured plenty of the mistakes Niles made in trying to save the lives of the Doom Patrol, the group naturally assumes he was just a terrible dad. However, as we slowly learn more about Dorothy, there’s an apocalyptic reason why he has kept this girl both distant and a child for so long.

Most of the season, however, is reserved for exploring more of the backstories of the characters and giving them time to flourish as more than just sad souls who crack jokes. Cliff makes a larger effort to connect with his grown-up daughter but is still taking small steps, unsure she’d accept him as a man inside a robot body. Larry tries to make amends with his brother and his family but may find it hard to do so when the government still wants to lock him up for being so different.

Rita comes more out of her shell to jump back into acting while coming to terms with her mother. Vic, having gone through the tragedy of killing his father, tries to cope with his PTSD and find a love interest who is compelled by revenge. Jane gets a lot more depth this season as well considering the tangled tapestry of her multiple personalities showcases a far darker origin story than anyone else in the series.

Season two does has one caveat that holds it back from being another great season of the show. Production of the second season started in early 2020 and the Coronavirus pandemic shutdown production mid-way through. This meant that only nine episodes were finished and the last one to make it through production to air ends on such a hefty cliffhanger. At least there’s reason enough to return for another season consider how the second season left us hanging through no fault of its own. Hopefully, there are more seasons on the horizon for one of the most daring DC shows without question.